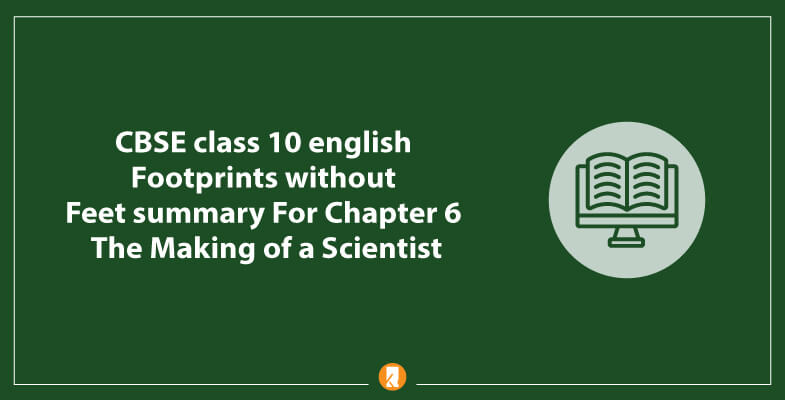 CBSE class 10 English Footprints without Feet summary For Chapter 6 The Making of a Scientist: Chapter 6 is a story of a curious child named Richard Ebright who conducts his curiosity to become a scientist.

He was very close to her mother and she plays a key role in developing his interest in science. He began his journey by collecting butterflies. He did research on the purpose of gold spots on the pupae of monarch butterflies.

He became famous when his findings on the working of cells got published in a scientific journal. He participated in various science exhibitions and won several awards. He also had an interest in public speaking & debate.

He was competitive and possesses a go-getter personality & has all the qualities of becoming a great scientist.

This chapter is about the top scientist Richard Ebright who was a curious child to become a scientist. He had started collecting butterflies in his childhood and when he is in 2nd standard, he had already collected all the 25 species found in his hometown.

He also collected coins, fossils, & rocks. His mother gave him a book named The Travel of Monarch X that has been a turning point in life and introduced him to the world of science.

He experienced real science in the country science fair and understood that if he wants to win something, he needs to do something extraordinary. When he was in the 8th standard, he selected the assignment of finding the cause of viral sickness that killed almost all the monarch caterpillars every year.

He thought that the cause for this could be a beetle, so he raised caterpillars with the presence of beetles but he was wrong. His next project for the science fair was testing the theory that viceroy butterflies copy monarchs & this project got the 1st prize in the zoology division and 3rd in the country science fair.

In 2nd year of high school, his research led to his discovery of an unknown insect hormone which led to his new theory on the lives of cells. He tried to identify the aim of tiny golden spots on the back of the monarch pupa. This project won first place in a country science fair and he got a chance to work at Walter Reed Army Institute of research.

He was continued with his advanced experiment & finally he was able to find hormones chemical structure. One day, when he was looking at the X-ray photos of the hormone, he got the idea of his new theory that tells that the cells can read the blueprint of its DNA. He and his roommate build the plastic model of a molecule to illustrate the working of DNA & it got published in a magazine.

He graduated from Harvard with the highest marks. He also has other hobbies such as public speaking, debate, and also a canoeist and an outdoor person. These reasons possess him with all the traits of becoming a good scientist. This chapter gives the message that if anyone wants to achieve his/her dreams, they can easily achieve them with perseverance, dedication, and hard work.

Download NOW: NCERT Books and Solutions for CBSE Class 10 English Footprints Without Feet Summary For Chapter 6 The Making of a Scientist.

Here you can check the word meaning for CBSE Class 10 English Footprints Without Feet Summary For Chapter 6:

We have covered CBSE Class 10 English Footprints Without Feet Summary For Chapter 6 The Making of a Scientist. Feel free to ask us any questions in the comment section below.