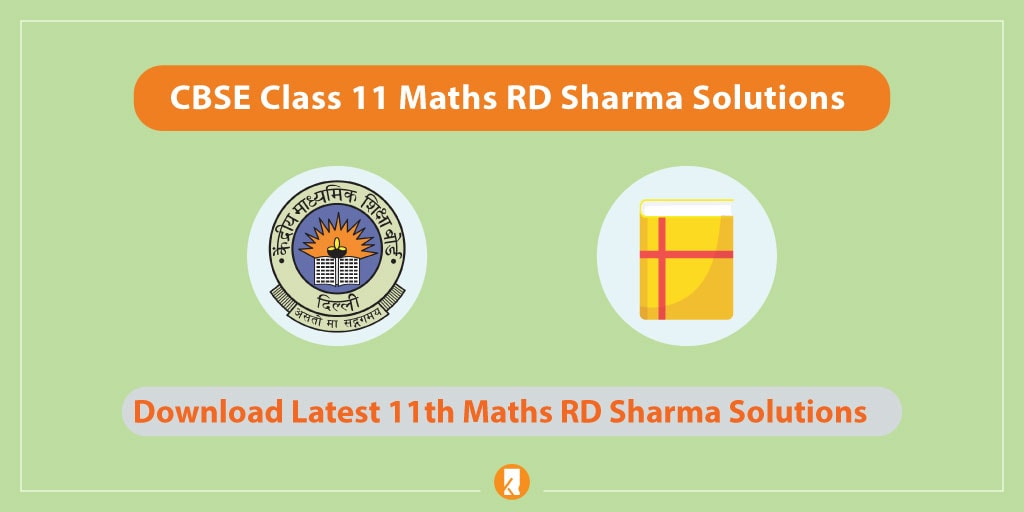 11th Maths RD Sharma Solutions are prepared as per the latest syllabus and the CCE guidelines. These solutions are explained in a detailed manner so that the students can easily grasp the concepts and these include detailed illustrations with more than Solutions.

As you can see from the above table, there are 33 chapters in RD Sharma Solutions for Class 11 Maths. In the following section, you will find the details of all 33 chapters. You can also download RD Sharma Class 11 Book PDF Chapter-wise.

The first chapter is ‘Sets.’ In this chapter, you will learn various concepts related to the topic, ‘sets.’ The various topics you would be studying include the definitions of a ‘set’ and ‘elements in a set.’ You will also learn how to describe sets using the set-builder and roster methods.

Besides this, you would also be learning other topics in the chapter, ‘Sets.’ You will learn the types of sets, including subsets, universal set, and power set, and how to represent sets using Venn diagrams.

Additionally, you will also learn how to perform different operations on sets such as addition, subtraction, and multiplication. The other topics that you will be studying in the chapter include the algebraic laws of sets and the results on the number of elements in a set.

In the chapter, ‘Relations,’ you will learn the definitions of relations, domains, and range of relations. You will also learn the concepts of pictorial diagrams, co-domains, and special relations between different types of sets.

The other topics that you will be learning in this chapter include the Cartesian product of sets, including those of two finite and real sets, and ordered pairs.

Chapter 3 in RD Sharma Solutions Class 11 Maths deals with ‘Functions’ and is mostly related to the functions of sets. The concept is essential in the subject. So, you must pay careful attention to it as it has prominence in other branches of mathematics such as differential and integral calculus.

In this chapter, you will learn about function as a correspondence between two sets and the relationship between one set and another. You will also be learning about the different functions of a set, including the exponential and ceiling functions.

The fourth chapter in Maths for CBSE class 11 is Measurement of Angles. It talks about the measurement of angles and the sign used to represent them. The chapter concisely explains these concepts to the students of class 11.

In this chapter, you will learn how to represent different trigonometric functions graphically. You will also be learning a host of other topics, including the sine function as a continuous wave.

The chapter, ‘Trigonometric Ratios of Multiple and Sub-Multiple Angles,’ deals with expressing various trigonometric functions as multiple and sub-multiple angles such as 2x, 3x, and so on.

Chapter 10: Sine and Cosine Formulae and their Applications

The chapter mainly deals with the applications of the sine and cosine formulae in various fields such as Geography to estimate the distance between two different landmarks.

Chapter 11 talks about the different trigonometric equations, their meaning, and applications in solving various problems.

In chapter 13, you will learn about the concept of ‘Complex Numbers.’ You denote complex numbers using the symbol ‘I’ which stands for IOTA. A complex number has two parts. Of these two parts, one part is a real number, and the other is an imaginary number denoted by the symbol’ IOTA.’ Besides this, the chapter also tells you how to add, multiply, subtract, and divide different complex numbers.

Other operations on complex numbers that you will be learning include modulus, conjugation, and reciprocity.

In this chapter, you will learn how to solve or simplify different types of quadratic equations.

The chapter on ‘Linear Inequations’ deals with the concept of change in the equation when a variable or value changes over from one side to the other. You will also learn to apply the modulus operation to a linear inequation and its effects on the inequality.

Chapter 16 introduces you to the concept of ‘Permutations.’ The chapter explains the meaning of permutations and their applications in solving different types of problems. Additionally, you will also learn the effects of order of selection and other allied concepts.

In this chapter, you will learn about combinations. The chapter also tells you that the order of selection does not affect combinations.

In chapter 18, you will learn the concept of the binomial theorem, including its definition and applications for solving various problems.

The chapter tells you all that you need to know about geometric progressions, including its definition and formula.

In this chapter, you will learn about special number series such as the sum of natural numbers and their squares and cubes. You will also learn how to find them using suitable formulae.

Besides this, the chapter also tells you about the different operations you can perform on special series such as addition and subtraction.

Cartesian System of Rectangular Coordinates is a part of coordinate geometry that you have learned in the previous classes as well.

The concept of circles is essential for Mathematics for CBSE class 11. In this chapter, you will learn the definition of a circle and its standard and general equations. Apart from this, you will also learn how to express a circle in the diameter form.

The chapter deals with the concept of parabolas, which are the graphical forms of quadratic equations. Besides this, you also have other concepts related to parabolas, including various theories and formulae, among other things.

An ellipse is a ‘squished circle’. So, in this chapter, you will learn not only the definition and meaning of ellipses but also various other concepts such as the focal distance of an ellipse and the different formulae used to find them. Besides this, the chapter also talks about the layout of an ellipse and has various problems related to it.

Simply put, a hyperbola is a curve. The chapter talks about different aspects, such as the standard equation of a hyperbola. Besides this, it also tells you how to trace a hyperbola. Other topics that you will be learning in the chapter include conjugation, second focus and directrix, eccentricity, and the length of the latus rectum.

In the chapter, ‘Limits,’ you will learn the definition of limits. Besides this, the other concepts that you will be learning include the evaluation of left-hand and right-hand limits and the algebra of limits. The chapter also tells you the differences between a function’s value at a point and the limit at the same point.

Additionally, the chapter also has concepts like the evaluation of algebraic limits, trigonometric limits, and exponential and logarithmic limits, among other things.

There are two types of mathematical reasoning – inductive and deductive. The chapter, however, focuses on deductive reasoning. You also have examples in the chapter that explain whether there can be a mathematical statement which you can reason as true or false.

Other essential concepts that you will be learning in the chapter include compound statements, conditional statements, negations, and so on.

Statistics deals with the analysis and interpretation of data by using the range, the measures of dispersion, and mean and standard deviations. The chapter also tells you about the concept of frequency distribution and its analysis.

Probability is the possibility of the occurrence of an event. So, in this chapter, you will learn various concepts such as elementary events or outcomes and samples in experiments. You will also learn to combine two or more events tied to random experiments and the different types of events, including compound events, exhaustive events, sure events, and more.

So, these are the 33 chapters that you will be studying in Mathematics in class 11. These concepts come in handy for various branches of higher education, including engineering and architecture. Hence, make sure to go through all of them by taking the help of RD Sharma Solutions.

We have covered the detailed guide on  CBSE Class 11 Maths RD Sharma Solutions. Feel free to ask any questions in the comment section below.

From where can I download RD Sharma Class 11 MCQ Solutions PDF?

You can find the links for that in the above blog.

How much does it cost to download the RD Sharma Class 11 Maths PDF?

It is free of cost.

Is it possible to download RD Sharma Class 11 PDF chapter-wise?

Yes, you can get Chapter-wise PDFs too.

What is explained in Chapter 10 of CBSE Class 11 Maths RD Sharma Solutions?

The chapter mainly deals with the applications of the sine and cosine formulae in various fields such as Geography to estimate the distance between two different landmarks.