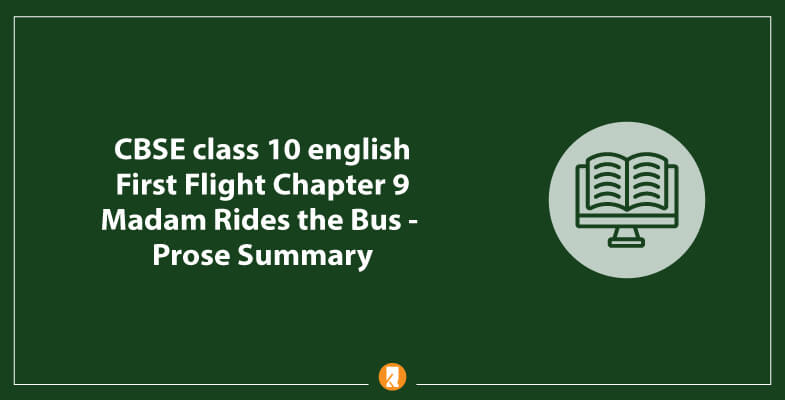 CBSE Class 10 English First Flight Chapter 9 Madam Rides the Bus: This chapter is about a brave 8-year-old girl whose name is Valliammai who lived near a bus stop in a village & had a desire to enjoy a ride on the bus.

For that, she needed all information about the bus journey, gathered the bus fare, and then planned it so that she could be back at home before her mother woke up from her afternoon nap.

The story of this chapter brings us recounts of how innocently but responsibly she fulfilled her desire and experience on the bus ride & how a horrible incident makes her realize the reality of death.

The chapter is about a Tamil girl Valliammai who is eight years old. She did not have friends to play so she kept standing inside the doorway of her residence and saw people in the street which was her favorite pastime. But she was always mesmerized by the bus journey.

She was curious to know about a bus which traveled between her village and the closest city. She started collecting information about the timings of the bus from her neighbors.

The bus traveled to the town near her village which was about 6 miles away from her village. The fare of the bus was 30 paisa for one way & she started saving money for the bus fare.

She planned to travel in the afternoon when her mother was having her nap. She was standing on the roadside waiting for the bus & when the bus came, she told the conductor she wants to go to town.

The conductor was a jovial person. He showed her the seat. She was watching mountains, green fields, and palm trees grassland on her journey which was very fascinating for her. She saw a young cow that came in front of the bus while crossing the road.

The driver blew the whistle and the cow crossed by. She was watching everything but her main focus was to watch the outside landscape. After some time, the bus reached the final destination and all the passengers got down.

The conductor asked her to get down but she told her that she was there for the bus ride. She remained on the bus and had taken a return ticket from the conductor. The bus started and again she saw the same cow dead by the roadside which made her heart cry.

She became sad and tried to understand the meaning of life and death on her own terms. She came back home but did not share her bus journey with her family.

We have covered CBSE Class 10 English First Flight Chapter 9 Madam Rides the Bus – Prose Summary. Feel free to ask us any questions in the comment section below.