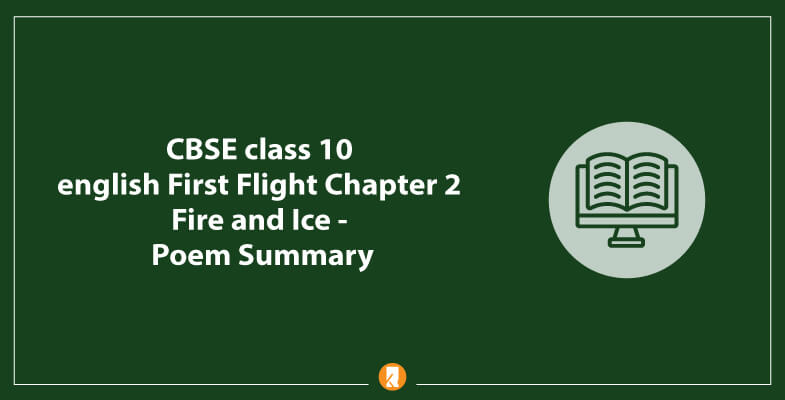 CBSE Class 10 English First Flight Poem Chapter 2 Fire and Ice – Poem Summary: ‘Fire and Ice’ by Robert Frost expresses ideas about the end of the world. In this poem, the poet tells us that the world would end in two distinct ways. Frost makes use of the elements of fire and ice to depict two common human emotions, hatred, and desire.

He says that hatred and desire are two emotions, which, if not controlled, would lead to the end of the world. Likewise, fire and ice are two elements in nature, which is under the control of human beings. So, if we misuse them, it, too, could lead to the destruction of everything around us. In this article on Fire and Ice Class 10 Chapter PDF, we will explain to you in detail about the summary of this chapter.

Robert Frost, in the poem, ‘Fire and Ice,’ says that the world will end someday. He also tells us that the cause of this devastating end would be fire or ice. He says this because it’s what people have believed in since ancient times. The poet also creates imagery of the two elements, comparing them to the emotions of hatred and desire.

He says that the world may also end if we don’t keep the two emotions at bay. Frost notes that human desires are often evil and have destructive qualities, just like fire. So, these desires that burn like the fire will soon consume the world if we don’t control them.

Similarly, the poet also draws a comparison between ice and hatred, saying that hate is as cold as ice. When we expose ourselves to the ice for more extended periods, it causes numbness. Likewise, if there is too much hatred in us, it leads to our minds becoming numb. And, when our minds become numb, it makes us cruel and insensitive beings. When we become brutal and callous, we tend to destroy everything that there is around us without the slightest thought of remorse, which, in turn, will lead to our demise.

The poem also talks about the argument that goes on between two sets of people. One set of people think that fire will destroy all creation. At the same time, the other set of people say that the end of the world would be due to ice. In saying so, the poet is trying to infer that human beings have the power to destroy the world.

We all feel different kinds of emotions and not just desire or hatred. So, the poet expresses his views on other types of emotions like love and lust. He says that these, too, may destroy all things, just as hatred and desire. However, he also means that it’s only possible if human beings tend to experience these emotions extremely. But this poem is all about colder emotions like hatred. We all know that love is the exact opposite of hate. While the feeling of love has the power to create, hatred is a killer of sorts. So, love may not have the same destructive ability as hatred, and thus, may not contribute to the end of the world.

While the poem talks about the literal end of the world, it also talks about the innate ability of human beings to destroy all things in their path. Thus, the poet states that human emotions are destructive and can cause the entire world to collapse.

You can do Fire and Ice Class 10 PDF Download

The poet expresses his ideas about how the world might end. Within the poem, there is an argument as to whether the world will end by fire or ice. Frost considers both points of view and compares them to a host of human emotions. While a few of these emotions are related to fire, others originate from ice.

Fire symbolizes emotions like greed, conflict, fury, cruelty, and lust. But in the poem, it mostly signifies the burning desire present in all human beings. Humans have inhabited and taken control of this planet for a long time now. This burning desire comes from the fear that they would lose everything that they have someday. It is this fear that keeps them going.

And because of this burning desire, they feel other destructive emotions that will eventually lead to their end. By comparing them to the fire, the poet says that these emotions are under our control. So, if we don’t keep them under check, they could overpower and destroy us.

In the poem, ‘Fire and Ice,’ ‘ice’ signifies various human emotions like coldness, intolerance, indifference, and rigidity. But it also talks about one significant feeling, which is hatred. Hatred is an emotion that makes us destroy. Although we have reasons to hate different things and people, we must still control this emotion as it could be dangerous to not only others but also ourselves.

All the other emotions, such as rigidity and intolerance, come from hatred. If we hate others, then those others will also reciprocate by hating us, leading to conflicts, and finally, destruction. Hatred spurs in us the feelings of intolerance and rigidity. And when we are rigid and intolerant, we don’t see and accept things the way they are. So, such emotions finally lead to the destruction of the world.

So, the poem, ‘Fire and Ice’ talks about the way the world will end. It argues whether it is fire or ice that will destroy us all. The poem also compares the two elements to human emotions such as greed, lust, hatred, and desire. Frost says that if fire and ice have the power to destroy the world, then so do negative emotions such as hatred and greed.

We have covered CBSE Class 10 English First Flight Poem Chapter 2 Fire and Ice – Poem Summary. Feel free to ask us any questions in the comment section below.

How to do Class 10 English poem fire and ice PDF download?

Can we access the Fire and Ice Class 10 PDF offline?

Yes, after downloading the PDF online once, you can access it offline.

What is the gist of the Fire and Ice poem class 10 PDF?

Fire and Ice’ by Robert Frost expresses ideas about the end of the world. In this poem, the poet tells us that the world would end in two distinct ways. Frost uses fire and ice elements to depict two common human emotions, hatred, and desire.

What does ice signifies in the Class 10 English textbook PDF fire and ice?