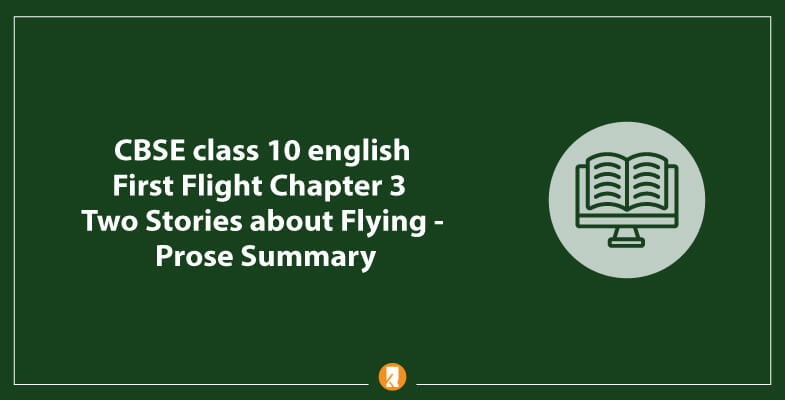 The title of the first part is ‘His First Flight’ and the name of the author is Liam OH Hearty, while the author of part-2 titled ‘Black Aeroplane’ is Frederick Forsyth’s.

The first part of the story tells us that the inner strength of the person plays an important role in crossing difficult situations, while the second part tells us that we should not risk the lives of others to satisfy our own needs. The two parts have been presented in a way that will be easier for you to digest. Read all the sections carefully.

The story of His First Flight centers around a young seagull who is scared to fly because he doesn’t trust his own wings. He is amazed to see the progress of his younger siblings who can fly without any kind of fear despite their shorter wings. The young bird on the other hand doesn’t have the courage to make proper use of his wings.

He feels nervous when he reaches the brink of the ledge and tries to fly. His mother and father warn him about the consequences of not flying. They tell him that he will have to starve on the ledge if he doesn’t make an effort to fly.

His parents fail to make him understand in spite of their attempts and he could not move an inch. He observes his parents fly with his siblings and he also notices the ways his siblings are taught about the essential aspects of skimming the waves.

One day his family members go to a big plateau which is located on the opposite cliff. The seagull feels hungry and requests his mother to bring him some food. His mother manages to bring a piece of fish and flies across to him. Unable to control himself the seagull jumped towards the fish with a loud shout.

He falls outward and downward into space and he could feel his wings while falling. The next moment magic happens. He starts flying without any kind of fear and his siblings also join him.

The pilot, Black Aeroplane who is the narrator of the story, talks about his misjudgment and how it is affecting him personally. The pilot in this piece is flying from Paris to London and while flying he thinks about the holiday with his family.

He wonders about the tasty breakfast while flying over the city. As he crosses Paris he witnesses the dark clouds which warn him about the upcoming storm. His mind tells him to turn back to Paris for safety reasons but he tries to ignore it. To satisfy his dream of a holiday, he risks the life of passengers and directs the plane into the storm.

It gets really dark and all the instruments stop responding. He loses control of the plane and hopes to survive. The pilot becomes worried after he realizes the amount of fuel that is left. Suddenly he notices another plane which is flying close to him through the storm. The pilot tries to direct the plane to the north and tries to follow the strange Aeroplane.

The pilot starts panicking yet again and the fuel levels drop further. The anonymous pilot plays the role of a guide by helping them out of the storm and vanishes in the air. After landing successfully the pilot inquires about the other plane but to his surprise, he finds that there was no other plane in the sky, except his.

We have covered CBSE Class 10 English First Flight Chapter 3 Two Stories about Flying – Prose Summary. Feel free to ask us any questions in the comment section below.