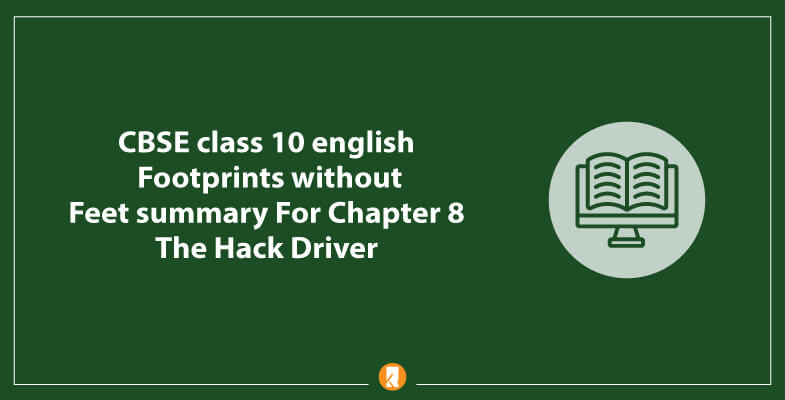 CBSE class 10 English Footprints without Feet summary For Chapter 8 The Hack Driver: The author of the Chapter 8 The Hack Driver was an American novelist Sinclair Lewis. This is a funny tale about a young lawyer who is very innocent. He went to a village to serve to summon to a person named Oliver Lutkins. At the railway station, he met a person who introduced himself as Bill.

Bill told that he knew everyone in the village and promised to search Lutkins for the lawyer. He visit lots of places with the lawyer and took a lot of money from him but they could not find Lutkins. The next day, when the lawyer wnet to the village with one of his colleagues, he came to knew that the hack driver was Lutkins. Everyone, except the lawyer, was laughing at him and he felt ashamed of himself.

This is a story of a lawyer who after completing his graduation started working as an assistant clerk with a famous firm in the city. He did not like the job of serving summons because sometimes he had to face tough situations. One day, he had to give summons to Oliver Lutkins who was a key witness in some case. He lived in a small village New Mullion. He was happy to go to the village but the village looked very dull and lifeless.

He saw a hack driver on a platform. He inquired him about Lutkins and came to know that he was a shrewd man and had taken loan from several people. The hack driver cunningly take out everything from lawyer that he has come here to serve court summon to Lutkin. He decided to rent Bill’s hack to search for Lutkins. Bill manipulated the lawyer and made him visit different places in search of Lutkins.

He always goes ahead and inquires about Lutkins. They went to Fritz’s shop to catch Lutkins where he plays poker. They have been told that he has gone to Gustaff barber for shaving.  Later at Gustaff’s place, they could not meet him and somebody told them they saw him in the pool room. They could not find him there and told he left the poolroom after buying cigarettes. In the afternoon, Bill asked the lawyer to buy food from his wife as it would be less costly than a restaurant.

They had their lunch at Wade’s hill which is a beautiful place. The lawyer was fully convinced that Bill is a generous and helpful person. He even started comparing city people and villagers. Later, they went to Lutkins mother’s house but she was a horrible lady and she was close to attacking them with a hot iron rod. However, the lawyer has to leave without serving to summon to Lutkins. He was badly scolded by his Chief the next day and was sent again to New Mullion with a colleague who knew Lutkins.

On reaching the station, the lawyer happily acknowledged that Bill was such a helpful person to him in searching Lutkins. Then, he was told by his colleague that the hack driver was Oliver Lutkins. The lawyer felt ashamed of himself. This chapter gives the message that we should not trust anyone without knowing them otherwise people will make fool of us.

You can Download NCERT Books and solutions for CBSE Class 10 English Footprints Without Feet Summary For Chapter 8 The Hack Driver.

We have covered CBSE Class 10 English Footprints Without Feet Summary For Chapter 8 The Hack Driver. Feel free to ask us any questions in the comment section below.