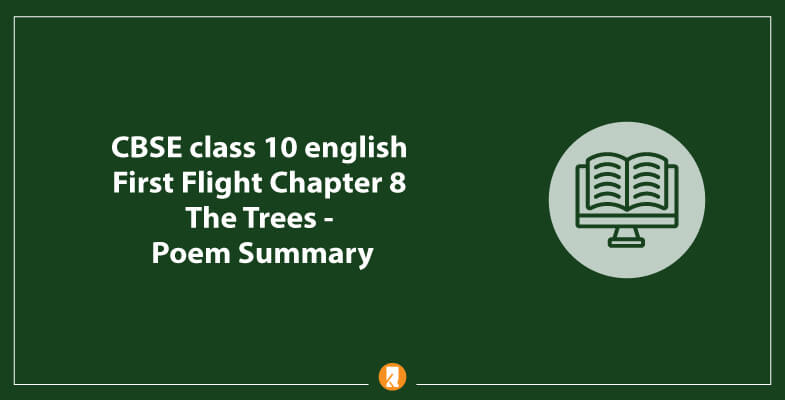 CBSE Class 10 English First Flight Chapter 8 The Trees – Poem Summary: In this blog, you will be get an idea of the poem CBSE Class 10 English First Flight Chapter 8 The Trees from the short summary. This poem has been written by Adrienne Rich. She was a famous poet, essayist as well as feminist and she was born in Baltimore USA. The poem which she has written talks about a conflict between men and nature. The poetess thinks that the ways trees and plants are being used in the interior decoration in cities are nothing imprisonment.

They need freedom and through her writing she has pointed out the desperation of the trees. The poetess tries to feel the emotions which the trees are experiencing as prisoners. At the end of the summary you will come across the important word meanings from the poem which will also help you to understand the poem in a better way. Read all the sections carefully.

Here “I” represents the voice of the speaker of the poem and her name is Adrienne Rich. Poem The Trees deals with a voice which comes along with a body and it is engaged in the activities and interpreting various things that are not organic to conventions of a nature poem. This is a different kind of a poem that concentrates on the struggle of a population of trees.

The poem talks about the desperation of the trees who are trying to escape the confined surrounding of a greenhouse. The poem has a symbolic meaning. The trees cannot escape even if they want to and here the poetess is looking at the trees from a different angle. The poetess tries to highlight the point in a language which is totally inappropriate just like the greenhouse. The poetess is trying to understand the things which the trees go through and she wants to paint a picture of the trees on that basis. She thinks that she can present these things through her writing.

Poetess wants to throw a light on the things which the trees are experiencing. She sees it from a different perspective. In the poem, the trees are nothing but the house of the poet. Their roots are trying hard to separate themselves from the cracks of the floor in the veranda. The leaves are also progressing towards the glass. The poetess hears the breaking of a glass and the trees are trying to set themselves free. The moon which works like a mirror is breaking into pieces as the shadow of the oak tree is dividing the moon into many fragments.

The speaker’s head is full of whispers and she thinks that she might not have to hear those sounds again.

You can Download NCERT Books and solutions for CBSE Class 10 English First Flight Chapter 8 The Trees.

We have covered CBSE Class 10 English First Flight Chapter 8 The Trees – Poem Summary. Feel free to ask us any questions in the comment section below.