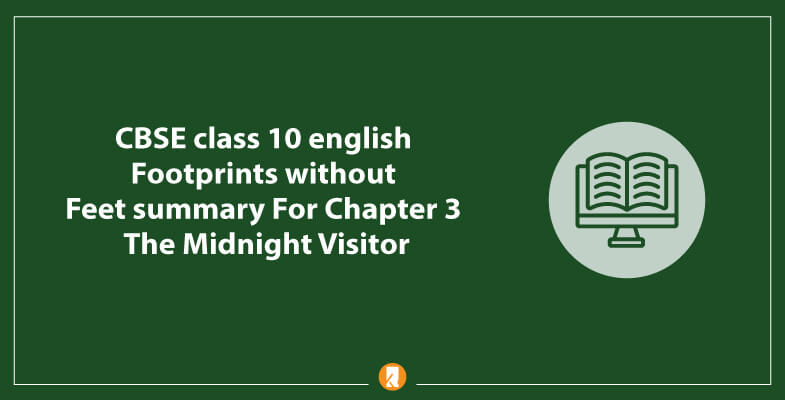 CBSE Class 10 English Footprints Without Feet Summary For Chapter 3: Here we are giving you the summary of ‘The Midnight Visitor’ where the story centers around an event from the life of a secret agent. Ausable who is a secret agent was expecting a vital report, while another secret agent Max threatens Ausable with a pistol asking for the report.

Let’s read the summary to learn what happens next.

‘The Midnight Visitor’ is a story written by Robert Jay Arther Jr and is one of his notable works from his collection of short stories. The story begins with a witty secret agent named Ausable. He was with a writer named Fowler the entire evening since Fowler was excited to spend the evening with a secret agent. However, while spending time with Ausable he came to realize that Ausable is someone very different. He is exactly the opposite of the character what he expected and turns out that Ausable is ‘a bore’ in person.

However, he explains to his guest tha he is been misjudged and soon he is about to get the report which bears the power of changing the country’s future. After that Ausable takes Fowler to another room where they both meet Max another secret agent holding a gun towards them. Max asks them to stay comfortable until the report concerning the missiles arrives which actually is about to arrive within 30 minutes or so since Max is there is steal the report. Well, this was a genuine adventure that Fowler came across in his life that he expected to experience while meeting with a secret agent.

This is the time when Ausable started narrating a story where a guy came down to his home from the balcony last month. And they suddenly heard a knock on the door. Ausable stated that this might be the police since he asked the cops to check on him after some time because he wanted to make sure that the reports which were coming in with extra security. Max asked Ausable to send away the police and he would be waiting in the balcony. Or else he would not hesitate to shoot both of them and would go to the extent of getting caught by the cops.

So, as the doorknob turns, Max gets himself to the balcony and everybody hears a loud scream. And with the door open a waiter enters stating that he brought the wine which Mr Ausable ordered. After keeping the bottle, plate and glasses on the table he leaves the scene. Fowler is shocked and asks Ausable about the whereabouts of the police to which Ausable replies that there is no question of police coming. Fowler also asks him about Max and the balcony and to this Ausable replies that there is no balcony and Max is not returning. This small incident shows how smart Ausable is and how he outsmarted Max who amidst the confusion did not judge where he is stepping his foo. Is it for the balcony or a window? Max basically jumped off from the top floor and might not be alive at the moment. So this is how Ausable outsmarted the situation and saved both him and Fowler.

You can Download NCERT Books and solutions for CBSE Class 10 English Footprints Without Feet Summary For Chapter 3 The Midnight Visitor.

Well, this is all about ‘The Midnight Visitor’. We hope we offered you a clear view of the chapter. If you still come across any doubts make sure to ask your query since we are always ready to help you out.

We have covered CBSE Class 10 English Footprints Without Feet Summary For Chapter 3 The Midnight Visitor. Feel free to ask us any questions in the comment section below.