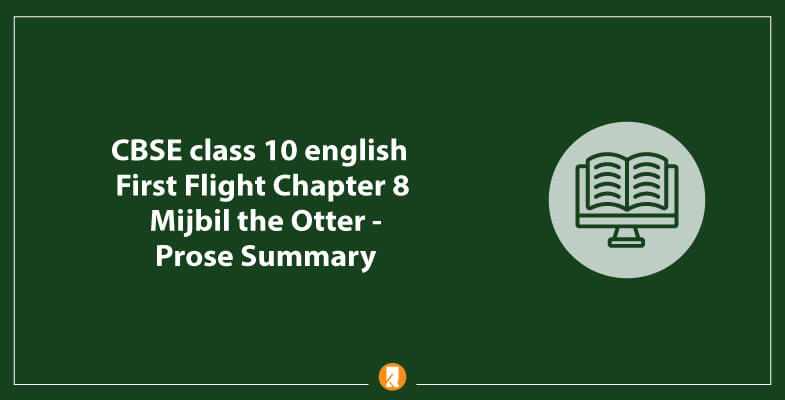 CBSE class 10 English First Flight Chapter 8 Mijbil the Otter – Prose Summary: Mijbil the Otter is an article written by Gavin Maxwell. It is an interesting read because it offers a very different perspective to the readers. The article is mainly about the experience of the author, Gavin Maxwell, when he decides to pet an otter. He narrates his experiences and takes us in his journey about how he found the otter and later named him as Mijbil or Mij.

The journey of the author begins from the country of Iraq. He travels from Iraq to London by a flight with the otter. In the flight, everyone is scared when they see an otter. Thus, chaos is created. But a kind air hostess helps the author and lets him travel with Mij. Later when he arrives in London, people are baffled to see an otter. They keep guessing the name of the animal till the end.

Mijbil the Otter by Gavin Maxwell is an article which revolves around the experiences of the author after he pets an otter and names him Mijbil or Mij. The story begins when the writer is travelling to a place called Basra, along with his friend. At one point, the author expresses his interest to pet an otter. The author had lost his pet dog and he feels lonely ever since the dog passed away. Therefore, he wishes to pet an otter. His friend suggested he get an otter from the marshes along the river Tigris in Iraq.

When they arrive at the destination, they discover only a letter from the friend’s mail and nothing else. Days pass by and the friend leaves. But the author still keeps waiting for the mail. As soon as he received it, he went to the room only to find an otter (packed in a sack). The otter has been sent to him with the help of the Arabs along with a message. The author names the otter as Mijbil and lovingly calls him as Mij.

The otter took some time to get acquainted with his new environment. Mij loved played with water and eventually taught himself how to open the faucet. Time passed by on rosy wheels in Basra and soon the time came to go back to London. Since animals were not allowed on the airline operated by British, the author had to book an airline that allowed Mij. He carried the otter in a box and took him along. An hour before the departure of the flight, the author kept the box aside and went to have his meal. When he returned he found that box had holes, and blood was coming out of the holes.

He realized that the otter had created those holes and destroyed the internal lining. He rushed to the airport because he had only ten minutes left before the flight departs. He cleans the box and reaches the airport on time. Later, he explained the entire incident to an air hostess. The kind air hostess suggested he keep the container on his lap during the journey.

Gavin was thankful to the air hostess for her generosity. When the author opened the container, the otter leapt out and disappeared. Chaos is created inside the flight and passengers begin to panic. But thankfully the air hostess had found the otter and returned him to the author safely. Finally they reach London. Mij was fond of ping-pong balls and marbles among other things. He also grew fond of the author’s broken suitcase.

When the author went on a walk along with Mij, people of London made some wild guesses about the animal but no one seemed to know what it was. Some thought it to be an infant seal while others thought it was either a squirrel or a hippo. But the most surprising reaction came from a labourer who was digging hole. He asked the author, “what’s that purported to be?” This is how the story ends.

We have covered CBSE Class 10 English First Flight Chapter 8 Mijbil the Otter – Prose Summary. Feel free to ask us any questions in the comment section below.