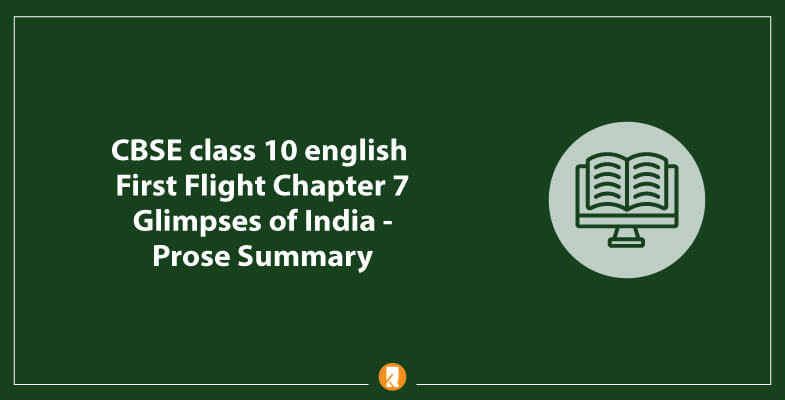 CBSE Class 10 English First Flight Chapter 7 Glimpses of India: ‘A Baker from Goa’ is a story that speaks about the importance of a baker in the Goan culture. The relevance of a baker has been there in Goan culture since the time the Portuguese ruled over the city of Goa.

Although the Portuguese left Goa they left behind their traditional skills of baking bread. Till now, Goans bake bread as a part of their own culture.

In this particular story, the author retells memories from his childhood days where he was excited to see a baker. The author and his mates would get so excited at the prospect of a baker that they would rush to him as soon as they woke up, without even brushing their teeth. In this article on CBSE Class 10 English First Flight Chapter 7 Glimpses of India, we are going to give an in-detailed idea about this chapter, which will help you in deeper understanding.

The lesson Glimpses of India A Baker from Goa starts with the narrator revealing a description of Goa from the point of view of his elders. During the time of his elders, Goa was under Portuguese rule. It was not independent like present times.

The narrator’s elders talked about the relevance of bakers from their villages is even valued in the present times, after the Portuguese have left. The bakers are known as ‘Paders’ in Goa. Several kinds of equipment they used, from mixers, molders to their traditional furnaces, still come in use for the people of God even today.

This is also a secret behind the famous bread loaves. Although they themselves do not exist now, yet their sons have passed on their secrets. In some parts of the village, the thud of their bamboo stick can still be heard.

The narrator remembers this same jingling thud as the alarm to wake him up in the morning, and he would then rush to them without even brushing their teeth. The maid-servant of the house was in charge of collecting their loaves while the children divided the bread bangles for themselves.

The culture and traditions of Goa have a special place for these bakery products. In marriage gifts, one can find a type of sweet bread known as Bol, and then there are cakes and Bolinhas or kinds of cookies made from coconut which are also eaten at every festive occasion and the female of the house prepares sandwiches at the occasion of her daughter’s ring ceremony. The author then goes on to talk about the kind of attire.

It was a kind of unique frock that was of knee-length and known as ‘kabai’. In the narrator’s childhood days, a shirt and trousers of almost ankle lengths was the regular outfit. The bakers collected their payments at the end of the month.

The bakery has been a suitable profession for keeping the families of bakers joyful and prosperous. Although those old eaters of loaves might not be present anymore, the makers still do exist. Their legacy has been left in various ways that still reside among the narrator’s kind.

We have covered CBSE Class 10 English First Flight Chapter 7 Glimpses of India – Prose Summary. Feel free to ask us any questions in the comment section below.