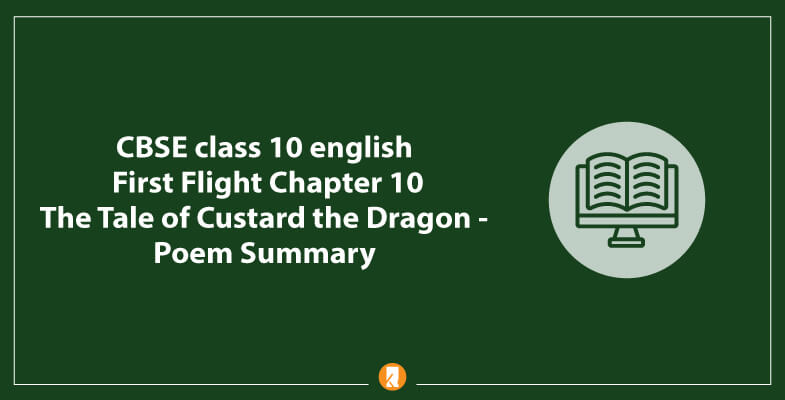 CBSE Class 10 English First Flight Chapter 10 The Tale of Custard the Dragon – Poem Summary: The poem ‘The Tale of the Custard Dragon’ is written by Frederic Ogden Nash. Nash was an American poet who is famous for penning light verses. He is also popularly known as the producer of humorous poetry. He has received several awards out of which the Sarah Josepha Hale Award in 1964 remains a standout.

The poem by Frederic Odgen Nash presents the tales about the custard dragon. It is actually a fantasy written in the form of a verse. The fantastical poem is about Belinda who resides alone in her house. She has no one to her company but four pets. These four pets are different animals- one is a kitten whose name is Ink, another is a grey coloured mouse Blink, the third one is a little yellow-coloured dog named Mustard, and the fourth one is a dragon Custard. All three pets in the house take immense pride in their bravery and fearlessness. They look down upon Custard because he is timid and a little fearful.

But things appear to take a different turn one day when a pirate arrives. Custard is ready to teach the pirate a lesson. While others seem to be afraid, Custard shows up his bravery and gobbles down the pirate. He shows his friends how brave he too could be. Once the danger has passed, all three pets again start boasting about their courage. And while Custard seems to agree with everyone, we clearly know who appears to be brave and who actually is brave and seems to be a coward.

Frederic Ogden Nash is a popular American poet, who is also accredited with the title of “producer of humorous poetry.” The poem “The Tale of Custard the Dragon” is composed in the style of a ballad. A ballad is a song that tells a story, especially about courage or heroism. This humorous ballad ends with a parody.

The poem is about Belinda who lived in a little white house along with her four pets. These four pets include a black kitten, a yellow dog, a grey mouse, and a little dragon. There was also a red wagon too. The little black kitten was called by the name Ink, the little grey mouse was called Blink, the yellow dog was called Mustard. The name of the dragon was Bu but Belinda called him as Custard. Custard had big sharp teeth and spikes on top him. His lower body was covered with scales and his mouth looked like a fireplace, and the nose was like a chimney. His toes looked like daggers.

Belinda considered herself to be as brave as a barrel full of bears while Ink and Blink seemed like they could even chase away lions. Mustard seemed to be as brave as a ferocious tiger. But Custard seemed to be the weakest one. Belinda used to ruthlessly tickle Custard most of the times. While other pets called him Percival which referred to a knight of King Arthur’s court who sought the Holy Grail.

Belinda and Blink made fun of Custard and giggled a lot whenever he said that he wanted a safe cage for himself. Also, Ink and Mustard mocked him about his age only because he was scared of every little thing.

It so happened that one day a pirate entered the house. He was armed with guns in both hands and a knife between his teeth. Everyone started to panic when they saw the pirate, even Belinda started crying for help. While all the animals hid away in fear, Custard was the only one who fought against the pirate with all his courage. He ate away the pirate in one single bite. When everything was done, all other pets thanked him. In the end, they realized that they made fun of the dragon thinking him to be timid. All of them began to say that they are braver than him and could have fought the situation in some other but better way.

The poet has tried to show that sometimes a timid looking person is an actual hero in times of need.

You can Download NCERT Books and solutions for CBSE Class 10 English First Flight Chapter 10 The Tale of Custard the Dragon – Poem.

We have covered CBSE Class 10 English First Flight Chapter 10 The Tale of Custard the Dragon – Poem Summary. Feel free to ask us any questions in the comment section below.