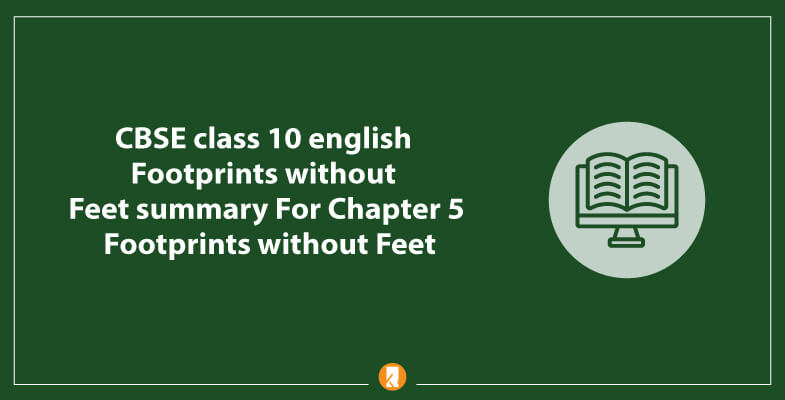 CBSE Class 10 English Footprints Without Feet summary For Chapter 5: It is a very exciting story about a scientist named Griffin & his rare formula of invisibility. Griffin developed a drug that formed his body invisible but being invisible, he can be only felt physically. But, he then misused his power for stealing money, clothes, & food. He found it difficult to stay in London with such power, so he decided to move to a small village Iping.

The people of that village were suspicious about him and everyone looked at him weirdly. Various incidences happened in the hotel where he stayed. He again started stealing money from people because his money exhausted and he also hit the owners of the hotel when they suspected him. However, at last, he had to reveal his identity to the people but nobody caught him as he became invisible.

In this article on CBSE Class 10 English Footprints Without Feet Summary, you will observe that this is quite an interesting story about a scientist named Griffin. He had been searching for ways that could make a man invisible. But one day, he got success in his experiment & invented a formula with which he can become invisible but can be touched and felt physically. Griffin swallowed the drug and became invisible. He accidentally stepped in mud and was seen first by 2 young men who followed his footprints till it became faint.

He was walking on the roads and was feeling cold so he entered a shopping center to felt warm. After the stores shut down, he has chosen to wear some comfortable garments and eaten something. Firstly, he has unpacked a couple of garments and wore them. At that point from the kitchen of a cafe, he has eaten cold meat. Then, he decided to sleep on a heap of quilts in the store. The next morning before he woke up, some store workers had started following him. He removed all the clothes and became invisible once again.

Then he was wandering Without clothes in the chilly winters of London. He decided to take clothes from a theatre company as he was sure he will get something there to cover his face too. He has stolen dull glasses, a bogus nose, a hat, & a few bandages to cover his face. He went to a shopkeeper’s place and stolen all his money. He realized London is quite a busy place to live like this, so he thought of moving to the Iping village.

He booked two rooms in a hotel in the village and reached there. It was quite unusual for the villagers that an outsider with such a strange appearance has come to stay at a hotel throughout winter. After a few days, his money depleted & he started stealing from people. When the owner and his wife attempted to check his room in his absence, he hit them. The owners thought there were spirits in the inn and that an unusual guest is responsible for it as they cannot saw anyone.

At that point, the town constable is requested to inquire in regard to what his identity is and what he did to her furnishings. This made him annoyed and decided to show his identity as a headless man. They could not catch Griffin as he took off all his garments and became invisible. This story gives the message that human nature also misuses their own discoveries.
You can Download NCERT Books and solutions for CBSE Class 10 English Footprints Without Feet Summary For Chapter 5.

Must Read: Meanings from the CBSE Class 10 English Footprints Without Feet Summary For Chapter 5

Here you can check the word meaning for CBSE Class 10 English Footprints Without Feet Summary For Chapter 5:

Can I get Class 10 English Footprints without feet chapter 5 summary?

Yes, you can get the summary from this blog.

Who is the main character of the story as per the Footprints without feet summary?

Griffin is the main character.

As per the Chapter 5 Footprints without feet summary, what did Griffin make?

Griffin made a rare formula of invisibility.

How much does it cost to download the Summary of Footprints without feet chapter 5?