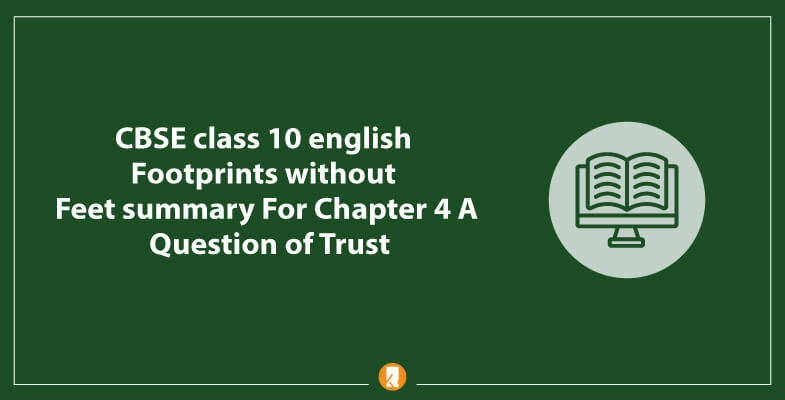 CBSE Class 10 English Footprints without Feet Summary For Chapter 4 A Question of Trust: Victor Canning the author speaks the hard and fast truth about life that is you need a thief to catch a thief. However, there is also another saying that says that there is honour amongst thieves. Let us go through the Summary to learn what actually the story tells.

The story centres around a 50-year-old man Horace Danby and everyone that surrounds his life. Well each of the individuals around him considers him to be an honest and good man. He expertises in making locks and thus in the course of time earned pretty sufficiently to hire two servants to be working under him. He went to jail once which was 15 years back because he committed a robbery. This year when he again visits a house to commit a robbery again he meets a woman who pretends to be the owner of the house. However, after 2-3 days, he gets arrested and then he gets to know the actual identity of the women. Let us now get to the Summary to know the identity of the women as well.

The story is about Horace Danby who is a 50-year-old man who builds locks and shares his life with his housekeeper. Everyone considers him to be a gentleman. However, this is not the case, he commits robbery every year unknown to everyone. And the way he commits the robbery suffices his living for a year. Additionally, with the remaining money, he buys Classic, rare and expensive books. Well, he invests in the rare and expensive books since he is very much fond of the expensive collection of books.

This time he plans of executing a robbery at grange which is named Shotover Grange. He collects all the necessary information regarding the area including the whereabouts of the family residing there. Additionally, he also learns about the servants, about the dogs, the wiring of the house, the safe of the house. He also goes to the extent of gathering information such as the worth of the jewellery kept inside the safe.

Once he reaches the grange, he meets a woman there who by way claims to be the owner’s wife. She offers him an option that she will forget about the event once he helps her open the safe because she is in a hurry to attend a party as she could not remember the passcode of the safe. From no angle, Horace realizes that he helped out another thief and leaves happily since he assumes to be safe from his quest. Also, he opens the vault without wearing his gloves.

After 3 days, a police officer comes in and arrests the protagonist claiming his fingerprints was all over the safe in Shotover Grange. He at that moment realizes that he was fooled by that particular lady who claimed to be the owner’s wife. He understands that the lady was a thief herself and he unknowingly helped a thief on his mission to rob. He then goes to jail and there he becomes an assistant librarian. On his time in jail, he gets infuriated whenever he hears someone talking about honours amongst thieves. He feels betrayed by his one community.

You can Download NCERT Books and solutions for CBSE Class 10 English Footprints without Feet Summary For Chapter 4 A Question of Trust.

Well, this is all about ‘A Question Of Trust’. We have given the complete Summary of the chapter to let you understand the chapter in a simple and sorted manner. If you still face any doubts make sure to come up with your query. We are always ready to help you out.

We have covered CBSE Class 10 English Footprints without Feet Summary For Chapter 4 A Question of Trust. Feel free to ask us any questions in the comment section below.