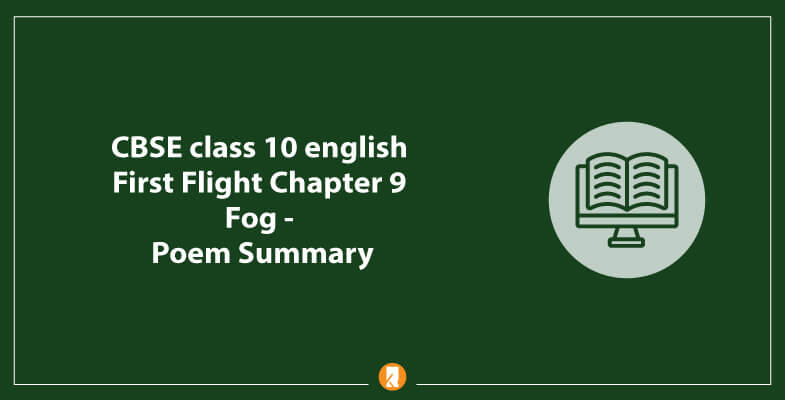 CBSE Class 10 English First Flight Chapter 9 Fog – Poem Summary: Fog is the title of the ninth poem in the syllabus of Class 10th English CBSE. The poem is written by Carl Sandburg. He was a well-known poet who belonged to America. He was not only a renowned poet but also a famous American editor. Carl Sandburg has received three Pulitzer awards during his lifetime.

During his lifetime he had written many poems out of which most were written about Chicago because it was the city where he lived. Among the several collections of poems written by Carl, “Fog” is the shortest one. Although the poem is very short in length, yet it has a very powerful meaning. The poem reflects strongly about nature through the representation of a metaphorical cat. There are other deeper meanings attached to the poem.

Fog shows Carl Sandburg’s vivid interest in nature. The poem also captures the moment during which the fog comes and goes. The essence of the poem is beautifully captured in those moments. The poet also uses a metaphorical cat in order to present a powerful image of life. The poet, in particular, takes about the fog in the Chicago city. He compares it with the cat because a cat always arrives with its soft paws, without making any sound. Hence, it does not give any signal about its arrival. Similarly, the fog also comes softly, without any signal of its arrival.

Fog is usually visible in areas of colder temperatures, or in mountains and forests. However, it is a different case in this poem. The poet talks about the fog which appears in cities and harbour. The poet draws a beautiful comparison between the fog and a cat. A cat arrives in soft paws, without making any noise. One cannot know when a cat arrives. Similarly, fog also comes very softly, without any noise. It is hard for the naked eyes to notice at the first instance. Slowly and steadily it engulfs the entire area. The fog then stays on for some time and creates trouble to the eyes. The fog stays, unaware about the troubles it causes.

The poet then goes on to say that it just comes, stays at the harbour and overlooks the entire city. The fog is quiet at the haunches and then eventually starts to move on. The poet describes about the movement of the fog after it has arrived. Fogs seem to be very gentle and cause no harm. The reason being it is very silent and slow. But when the fog engulfs the entire city, it causes trouble. In the cities, fogs cause accidents because people cannot see through it. Visibility decreases. And because people cannot see anything around due to the fog, terrible accidents take place. It can also cause hazards to human life.

Therefore, the poet compares the fog to a silent kitten- comes slowly, sits and watches the beautiful scene around as it covers the entire city.

In the end, the poet introduces the image of a small child and explains the comparison further. Just like a small child gets bored by playing the same game over and over again, the child moves on to a different game. Similarly, the fog also moves on from one city to the other. It does not stay still at one place for long.

We have covered CBSE Class 10 English First Flight Chapter 9 Fog – Poem Summary. Feel free to ask us any questions in the comment section below.