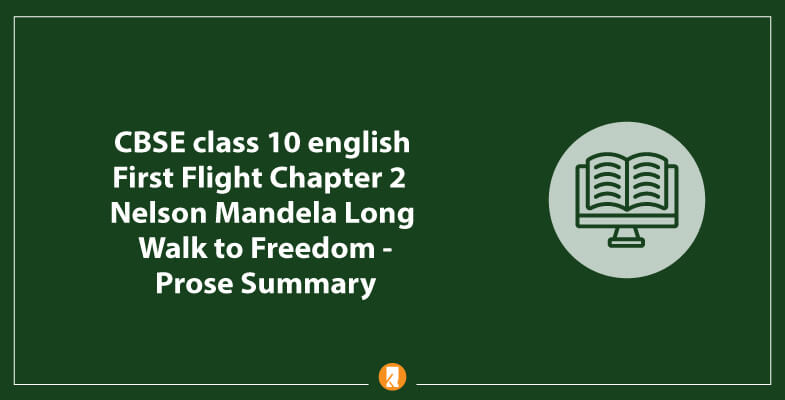 CBSE Class 10 English First Flight Chapter 2 Nelson Mandela Long Walk to Freedom is the autobiography of Nelson Mandela, who was the former South African President. This blog focuses on Nelson Mandela’s path to freedom. This chapter has been taken from the “Long Walk to Freedom” book which concentrates on the inauguration ceremony and various citations from his speech and also on his journey to being a freedom fighter.

It talks about the countless people who were victims of oppression and how those people fought for their freedom. His views on freedom have been written on his autobiography. You can go through our short summary to have an idea of the book. Read all the parts with a focused mind.

“A Long to Freedom”, by Nelson Mandela deals with the various barriers in relation to the freedom of South-Africa. On May 10, 1994, Nelson Mandela took an oath as the first black president of South Africa which was on the verge of becoming a new-born democratic country.

Notable persons from various parts of the world attended the swearing-in ceremony. Mandela thanked each and every one personally for being a part of this special day. Mandela gave assurance to the countrymen in his speech. He told his citizens that they would never face the same suppression of one by another. He added that there won’t be any kind of discrimination from today onwards on the basis of caste, creed, religion, language , ethnicity, gender and disability because he has established democracy in South Africa.

On that special day the people of South Africa sang two National Anthems. Mandela tried to explain the reason for starting a movement and it was none other than exploitation of Black-skinned people by the White people. He said that because of this kind of suppression of people of South Africa various stars were born. He always believed that hatred is the starting point in case of love. A person will understand the meaning of love when he starts hating people. Love happens when there are opposite circumstances. According to him a brave man is someone who is ready to conquer without getting afraid.

He always thought that a person’s life must revolve around two things. Firstly, a person must be committed towards his family, to his parents, to his wife and to his children and along with that he or she must also take care of his country, people and the community. Everyone is bound to fulfil his duty as per his inclination and interest and he also admitted that fulfilling the duties in a country like South Africa might seem like a challenge. Mandela’s definition of freedom changed with time. He explored the meaning of freedom when he became an adult. He concluded that freedom is nothing but an illusion. He acknowledged the fact that he and his other family members were all victims of oppression.

He believed that freedom should be a necessary element for the ones who have been victimized because of suppression. Freedom falls under their basic rights and the people who are trying to take away their freedom are all prisoners of the same kind. Thus, the oppressor is just like any other prisoner. The oppressor too is not free.

We have covered CBSE Class 10 English First Flight Chapter 2 Nelson Mandela Long Walk to Freedom – Prose Summary. Feel free to ask us any questions in the comment section below.