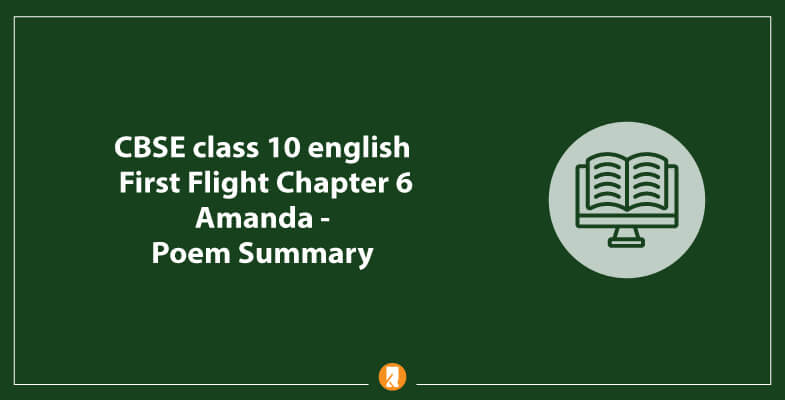 The name of the child is Amanda and she loves to dream. She wants to be free. The poem concentrates on the various barriers which the child has to face. The important point which the Poet Robin Klein is trying to make here is that the children should never be held captive or confined within the four walls.

The parents are responsible for a lot of things and the proper upbringing of their child is one of those things. But care must be taken in relation to the well being of the child. The children should not feel like they are in a prison.

This article has been curated in such a way which will help you to gather the in-depth idea behind everything that has happened in this chapter. You will come across some words at the end of the summary which has been presented with meanings. Read all the sections for better understanding.

In this poem, the poet talks about a girl’s state of mind. Her name is Amanda and is she is pressurized to follow the instructions of her mother. There is a list of do’s and don’ts which she is expected to follow. The girl’s mother often irritates her for her mistakes.

Her mother always gives her valuable suggestions which include not raising her shoulders and sitting up straight. Her mother also tells her to complete her homework. The little girl Amanda wonders about the freedom of living in an open area. She thinks about a life where there are no restrictions.

Her mother doubts her activities. She thinks that her child is sitting idle and not doing any work because of her laziness. Amanda sees herself as a mermaid who is swimming in the light green sea without any worries.

She visualizes a relaxing life in the beautiful green sea. Her mother brings her back to reality by asking whether she has cleaned her room and shoes or not.

Amanda starts daydreaming yet again and this time she sees herself as an orphan who is roaming, barefoot in golden silence without any kind of fear and there is complete freedom. She says to herself that she would have experienced what it is like to be free by making some patterns of her bare feet on the sand.

She would have understood the meaning of a peaceful life. She is brought back to reality by her mother again. She hears her mother’s complaints. Her mother tells Amanda to avoid chocolates because of her acne and pimples. She also criticizes her for her behavior. Amanda’s mother notices that Amanda is being unmindful when she is talking to her.

Amanda loses herself in another dream and this time she imagines herself as Rapunzel. It’s a character from a fairy tale and Amanda is interested to live a life like her in a huge tower. She tells herself that she will never make the mistake of letting down her hair from the tower like Rapunzel because she wants to live peacefully in the tower alone.

She will not let anyone come to the tower. Amanda’s mother now advises her not to be a moody kind of girl because she doesn’t want anyone to make her feel bad about the ways she treats her daughter. The poet has not highlighted the response from Amanda’s end. Amanda is not the same girl anymore because of repeated complaints from her mother.

She has even stopped wondering because she is so upset. She always thinks about this method as a form of escape from the dominance of her parents.

We have covered CBSE Class 10 English First Flight Chapter 6 Amanda – Poem Summary. Feel free to ask us any questions in the comment section below.