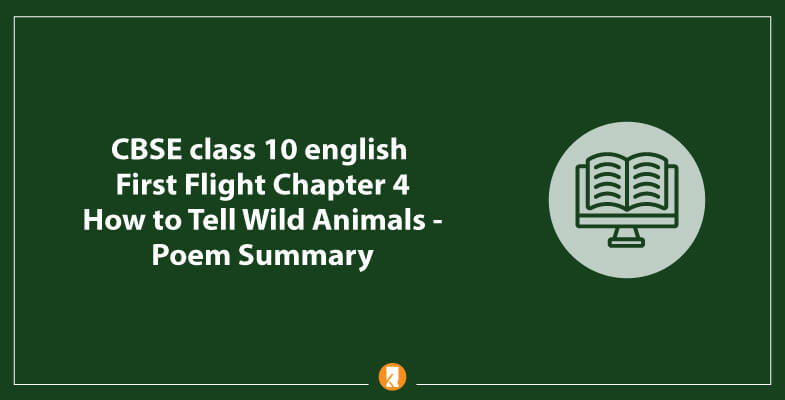 She has also made use of different literary devices to explain the characteristics of each wild animal.

In the poem, ‘How to Tell Wild Animals,’ the poet explains how each wild animal looks and behaves by incorporating humor. She starts with an Asian Lion, saying that its skin is light brown and that its roar is so loud that you may die of fear when you hear it.

The poet then says that the Bengal Tiger is of royal class that can attack and kill a human being. She also says that if a black striped animal attacks you, then it means that you have met a Bengal Tiger.

Wells then goes on to tell her readers about an animal with black spots on its skin. She says that if such an animal attacks you, then it means that you have surely crossed paths with a leopard. The poet also says that the leopard won’t stop attacking you no matter how much you scream for help.

Then comes the bear which she says will hug you tightly and won’t let go. She says that this is how you can recognize a bear. A bear kills its prey by hugging it tightly against its body. The poet then asks the readers as to whether they can tell all the wild animals or not.

After this, Wells explains to her readers about the hyenas that always have a smile on their faces. She also talks about the crocodile, saying that it is always crying. You can see tears in their eyes when they hunt and kill their prey.

The last animal on the list is the lizard-like creature, the chameleon. The poet then goes on to say that the only way to tell the difference between the chameleon and a lizard is that while a chameleon can change its skin color to hide from its prey, the lizard doesn’t have the same ability.

So, the poet, in the poem, ‘How to Tell Wild Animals,’ explains the characteristics of each wild animal and tells us how to differentiate between them.

You can Download NCERT Books and solutions for CBSE Class 10 English First Flight Chapter 4 How to Tell Wild Animals.

In the poem, ‘How to Tell Wild Animals,’ the poet, Carolyn Wells, uses different words that are of prominence. Such terms bring about a sense of humor. The poet has also used them to explain the characteristics of the different animals. Wells also uses various rhyme schemes and literary devices such as assonance, alliteration, and enjambment.

Similarly, other words used in the poem also have significance regarding the context which you can find below.

Here, the word non-plus means ‘confusion.’ It could be hard to tell different wild animals apart from each other, especially for someone new to recognizing them. So, the poet is trying to help her readers to identify different animal species mentioned in the poem. In using the word, the poet tells us that while animals like hyenas are always happy and laughing, other animals like crocodiles are still full of tears.

The poet has intentionally misspelt certain words like ‘leapt’ as ‘lept’ and ‘lep.’ She has done this to use the literary device known as the ‘poetic license.’ Poets use the ‘poetic license’ device in their poems to show specific actions that their characters are doing. Here, the poet has made mistakes to create rhyme schemes and to bring about a sense of humor.

The poet has used the word ‘caress’ which means to touch someone or something gently to help readers to sense bears. Bears kill their prey by hugging them tightly against their chests. So, in the poem, Carolyn Wells says that if an animal hugs you tightly, then you should know that it is a bear. She also says that bears will continue to embrace you until you recognize them. Thus, she connects the word ‘caress’ with the hugging of the bear.

In the poem, ‘How to Tell Wild Animals,’ the poet, Carolyn Wells, brings about a sense of humor by using different words and literary devices. In doing so, she helps her readers to get to know the characteristics of wild animals. She also tells us how to differentiate between two different animals in terms of their characteristic traits.

We have covered CBSE Class 10 English First Flight Chapter 4 How to Tell Wild Animals – Poem Summary. Feel free to ask us any questions in the comment section below.