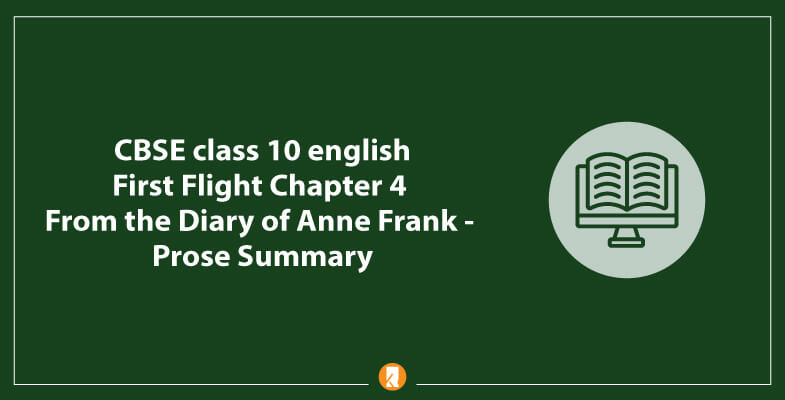 It is written during World War II and it focuses on the autobiography of a young girl Anne Frank. The writer has shared her thoughts in a diary.

She received a gift from her father on her 13th birthday and it was a Diary which she named it Kitty’. Anne Frank is a Jewish girl who hides herself during World War II from the Nazis. She writes about her experiences and the story during her time of depression.

You can also be a part of her journey and for that, all you need to do is read. Read all the sections of the blog carefully to have an idea of Anna Frank.

In this article on CBSE Class 10 English First Flight Chapter 4 From the Diary of Anne Frank, the author feels uncomfortable writing a diary because she hasn’t done it before. She thinks that no one will be interested to know about a young girl’s past experiences in the future. She tries to ignore her negative thoughts and finally decides to channelize her thoughts through her writings.

The author is running out of friends and she feels lonely. She decides to fill this empty place by naming the diary “kitty”. The writer thinks choosing paper over friends is a better option because she believes a paper is more capable of absorbing thoughts than people with a low patience level.

She always spends a good time with her friends but somewhere down the line, she feels that her friends will not be able to connect with her on a deeper level because they are not her true friends. She thinks that her father is the most lovable to presents her the Diary on her 13th birthday.

On June 20, 1942, she highlighted her nervousness about the results of her class. The author writes that the only subject on which she doesn’t have much clue is mathematics. She and her friend G try to stop the students from making noise but fail miserably. The author thinks that a quarter of her class will not be able to pass because they do not take part in any activities.

Anne tries to recollect her days in school. She remembers how her talkative nature has irritated her maths professor on a regular basis. The writer is made to do extra homework as punishment when he talks about something in the classroom.

Writing an essay on “Chatterbox” is the first punishment. The author thinks that it is weird. She tries to think about the topic and places concrete arguments in support of her thoughts. She mentions that she will try to a better person but it is not possible to stop talking completely. This amazes the professor and she gets another topic when she couldn’t her nature.

She becomes clueless after writing two times on a similar topic. She writes her third topic and she presents it in the form of a poem. The professor comes across a satire which is written by her and takes it lightly. The professor then decides to recite the entire poem in front of the class. The author again started talking without any kind of interruptions.

We have covered CBSE Class 10 English First Flight Chapter 4 From the Diary of Anne Frank – Prose Summary. Feel free to ask us any questions in the comment section below.