RRB has released a notification regarding the cancellation of 69 vacancies of DLW. Candidates can go through the below PDF for detailed information.

RRB NTPC has canceled a total of 69 vacancies and these vacancies under RRB Allahabad are treated as withdrawn from the centralized employment notice that was issued on February 28, 2019. The candidates who had applied for any of these above categories of DLW under RRB, Allahabad, are being allowed to modify their order of preference of posts under RRB Allahabad till April 30, 2019, without payment of any modification fees. Below the notification is shown regarding the cancellation of RRB NTPC Vacancy list. 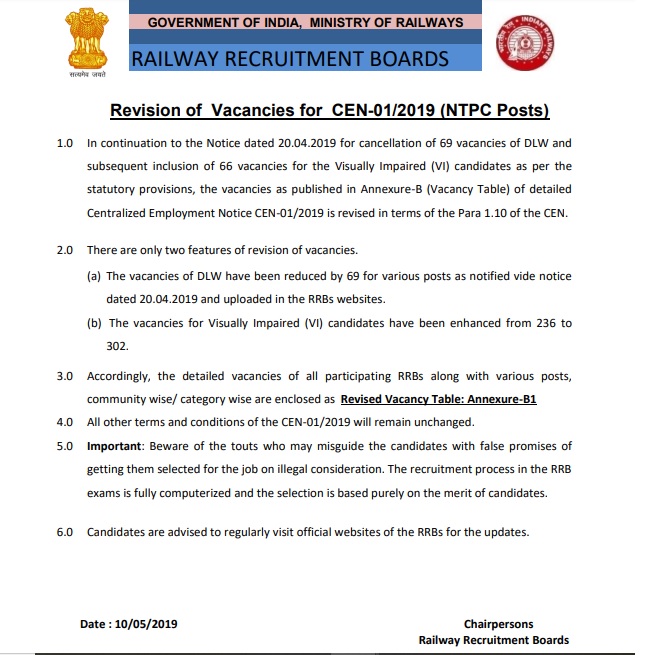 1. RRB NTPC Vacancy for UG posts with a minimum Educational Qualification of 12th or its equivalent and Age between 18 to 30 years as on July 1, 2019

2. RRB NTPC Vacancy for Graduate Posts with a minimum Educational qualification of a University Degree or its equivalent and Age between 18 to 33 years as on July 1, 2019.

Thus, candidates can go through the RRB NTPC Revised vacancy list completely and know the alternate way for it as mentioned in the blog. Candidates can start preparing for the RRB NTPC Exam 2021 with a wide range of RRB NTPC Books PDF available online.

We have included all the information regarding RRB NTPC Vacancy List 2021. If you have any query feel free to ask in the coment section.

How many candidates applied for the RRB NTPC 2021 exam?

How many vacancies are available for the undergraduate post in RRB NTPC 2021?

There are 10,603 posts allocated for the undergraduate post in RRB NTPC 2021.

How many vacancies are there for a Graduate post?

Which sector vacancies have been canceled?

The vacancies for DLW have been canceled due to the change in the work pattern.

Which zone has the highest number of vacancies?

RRB Allahabad has the maximum number of RRB NTPC vacancies.