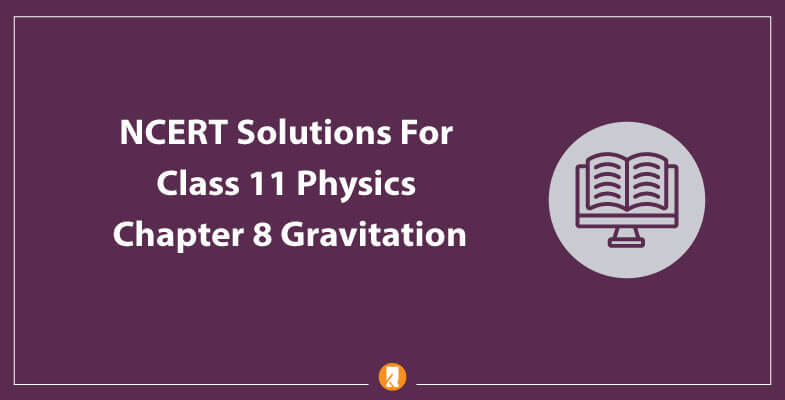 Planning to seat with your physics preparation any time soon? How about, check out the NCERT solution of chapter 8 physics class 11, to begin with. Not only it is an easy way to start with your physics chapters but it also a simplified method to study the topics.

Here we have given all the details about the chapter. Although in brief, still, it is a complete guide for a robust study session for your upcoming exam. Still, if you come across any doubts make sure to ask us, we are always here to help you with exams.

Gravitation being an interesting subject always offers ample scopes to explore the notion. Thus this chapter is packed with the basics idea of gravity, its effects and its invention. Better get the chapter in offline mode so that you can begin the exam preparation anytime anywhere. Get your chapter 8 physics class 11 NCERT solutions from here and start studying.

You can download CBSE NCERT Solutions for Class 11 Physics Chapter 8 Gravitation from below.

What will you learn in CBSE Class 11 Physics Chapter 8 Gravitation?

Chapter 8, Gravitation, NCERT Grade 11 Physics CBSE belongs to the last unit of Physics Part I i.e. Unit VI, Gravitation. We know all objects have a tendency to get attracted towards the earth. Students are thus, aware of the basic concept of gravity, how it got invented and its effects. However, Chapter 8 of NCERT Grade 11 Physics CBSE takes the students to further into the depths of the concept of Gravitation.You must have observed that all the material objects have the tendency to get attracted towards the earth.

If we throw something upward into the sky, it comes down and falls on the ground. It is the Italian Physicist Galileo who discovered the phenomena that all the bodies irrespective of the mass they possess fall back on the earth with a constant acceleration. This phenomena is termed as Gravitation.

A brief description about the chapter ‘Gravitation’ and its related sub-topics has been discussed as follows:

What is Kepler’s Law?

Kepler proposed three laws of planetary motion describing the motion of planets around the sun. These are
(i) Law of orbit: It states that are planets move in an elliptical orbit. Sun is present in one of the foci of the ellipse.
(ii) Law of Areas: Line joining the sun and a planet sweeps out equal areas in equal times
(iii) Law of Periods: The square of time period of revolution of a planet is proportional to the cube of the semi-major axis of the ellipse traced out by the planet.

What is Universal Law of Gravitation?

The Gravitational Constant: The value of gravitational constant G entering the Universal law of gravitation can be determined experimentally. This experiment was first done by an English Scientist Henry Cavendish. Its value is 6.67408 × 10-11 m3 kg-1 s-2

Acceleration due to Gravity of the Earth: It is the acceleration that an object gains due to the gravitational force. Its unit is m/s2 and is represented by ‘g’. Value of g on earth (at sea level) = 9.8m/s2.

What is Gravitational Potential Energy?

What is Escape Velocity?

Binding Energy: It is the mechanical energy required to remove a satellite from its orbit around the planet. It is referred to as binding energy of the satellite. It is measured in joules (J).

Binding energy of the satellite mass ‘m’ is given by:

Earth Satellites: Earth satellites are objects which revolve around the earth. Moon is the only natural satellite of the earth with a near circular orbit with a time period of approx. 27.3days. It is roughly equal to rotational period of the moon about its own axis. Many countries including India has launched artificial earth satellites for practical use in the fields like telecommunication, geophysics & metrology. Here in this topic you will also find the derivation to find the time period of these satellites.

Energy of an Orbiting Satellite: When the orbit of a satellite becomes elliptic, both K.E & P.E vary from point to point. The total energy which remains constant is negative as in the circular orbit case. If the total energy is positive or zero, the object escapes to infinity. Since the satellites are placed at finite distance from the earth, hence their energies cannot be positive or zero.

Polar Satellites are low altitude (h≈500-800 km) satellites. Their orbit is at right angle to the equator. They go around the poles in a north-south direction whereas earth rotates on its axis in an east-west direction.

Weightlessness: Weight of an object is the force with which the earth attracts it. For example, when we stand on a surface, earth also exerts a force opposite to our weight to keep us at rest. But if a situation the effective weight of a body becomes zero, weightlessness is achieved. It can be achieved if a body is falling freely under gravity, inside the spacecraft or satellite or at the centre of the earth.

. The chapter stands solid with 17 marks to score. Therefore, better get the chapter clear to score solid 17 marks alone from this section in your exam.

Topics To Be Covered In Class 11 Physics Chapter 8 Gravitation

Students should get a basic idea about the topics to be covered in this chapter. Thus we bring the curriculum bellow-

We have covered the complete guide on CBSE NCERT Solutions for Class 11 Physics Chapter 8 Gravitation. Feel free to ask us any questions in the comment section below.