The distance over which data moves within a computer may vary from a few thousandths of an inch, as is the case within a single IC chip, to as much as several feet along the backplane of the main circuit board. Over such small distances, digital data may be transmitted as direct, two-level electrical signals over simple copper conductors. Except for the fastest computers, circuit designers are not very concerned about the shape of the conductor or the analog characteristics of signal transmission.

Frequently, however, data must be sent beyond the local circuitry that constitutes a computer. In many cases, the distances involved may be enormous. Unfortunately, as the distance between the source of a message and its destination increases, accurate transmission becomes increasingly difficult. This results from the electrical distortion of signals traveling through long conductors, and from noise added to the signal as it propagates through a transmission medium. Although some precautions must be taken for data exchange within a computer, the biggest problems occur when data is transferred to devices outside the computer’s circuitry. In this case, distortion and noise can become so severe that information is lost.

Data Communications concerns the transmission of digital messages to devices external to the message source. “External” devices are generally thought of as being independently powered circuitry that exists beyond the chassis of a computer or other digital message source. As a rule, the maximum permissible transmission rate of a message is directly proportional to signal power, and inversely proportional to channel noise. It is the aim of any communications system to provide the highest possible transmission rate at the lowest possible power and with the least possible noise.

A communications channel is a pathway over which information can be conveyed. It may be defined by a physical wire that connects communicating devices, or by a radio, laser, or other radiated energy source that has no obvious physical presence. Information sent through a communications channel has a source from which the information originates, and a destination to which the information is delivered. Although information originates from a single source, there may be more than one destination, depending upon how many receive stations are linked to the channel and how much energy the transmitted signal possesses.

Any communications channel has a direction associated with it: 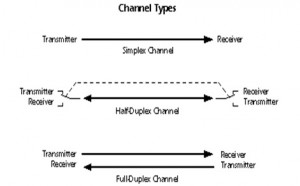 The message source is the transmitter, and the destination is the receiver. A channel whose direction of transmission is unchanging is referred to as a simplex channel. For example, a radio station is a simplex channel because it always transmits the signal to its listeners and never allows them to transmit back.A half-duplex channel is a single physical channel in which the direction may be reversed. Messages may flow in two directions, but never at the same time, in a half-duplex system. In a telephone call, one party speaks while the other listens. After a pause, the other party speaks and the first party listens. Speaking simultaneously results in garbled sound that cannot be understood. 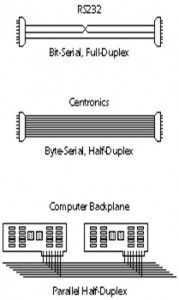 The baud rate refers to the signalling rate at which data is sent through a channel and is measured in electrical transitions per second. In the EIA232 serial interface standard, one signal transition, at most, occurs per bit, and the baud rate and bit rate are identical. In this case, a rate of 9600 baud corresponds to a transfer of 9,600 data bits per second with a bit period of 104 microseconds (1/9600 sec.). If two electrical transitions were required for each bit, as is the case in non-return-to-zero coding, then at a rate of 9600 baud, only 4800 bits per second could be conveyed. The channel efficiency is the number of bits of useful information passed through the channel per second. It does not include framing, formatting, and error detecting bits that may be added to the information bits before a message is transmitted, and will always be less than one.

The data rate of a channel is often specified by its bit rate (often thought erroneously to be the same as baud rate). However, an equivalent measure channel capacity is bandwidth. In general, the maximum data rate a channel can support is directly proportional to the channel’s bandwidth and inversely proportional to the channel’s noise level.A communications protocol is an agreed-upon convention that defines the order and meaning of bits in a serial transmission. It may also specify a procedure for exchanging messages. A protocol will define how many data bits compose a message unit, the framing and formatting bits, any error-detecting bits that may be added, and other information that governs control of the communications hardware. Channel efficiency is determined by the protocol design rather than by digital hardware considerations. Note that there is a tradeoff between channel efficiency and reliability – protocols that provide greater immunity to noise by adding error-detecting and -correcting codes must necessarily become less efficient.