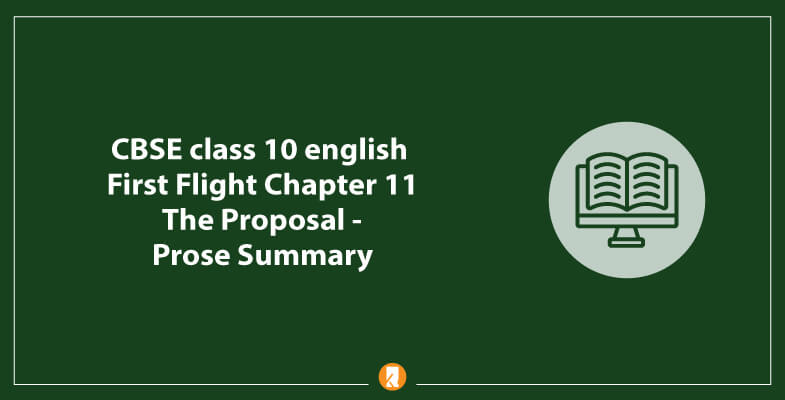 CBSE Class 10 English First Flight Chapter 11 The Proposal – Prose Summary: It is about the one-act play which was written by the Russian story writer and dramatist Chekhov in the year 1888–89 about the tendency of rich families to hunt ties with other wealthy families to expand their estates by encouraging marriages that observe economic sense.

We are going to understand everything about this chapter in this article on CBSE Class 10 English First Flight Chapter 11 The Proposal.

Ivan Lomov is a wealthy neighbor of Stepan Chubukov who was also wealthy & needs to get married to his twenty-five-year-old daughter, named Natalya. These three personalities are argumentative and they argue over petty problems.

The proposal is on the verge of losing in the middle of all this quarreling but the economic common sense ensures that the proposal is made although the fight perhaps continues. In this article on CBSE Class 10 English First Flight Chapter 11 The Proposal, we are going to help you to understand everything in detail about this chapter.

This act starts when Lomov entered his neighbor Chubukov’s house in neatly dressed up attire. Chubukov in great curiosity to saw him well-dressed and asked him the occasion. Lomov revealed that he had come for a desire.

Lomov is a thirty-five years old gentleman who was suffered from palpitations and get upset very easily. He thought that it was the right age for him to marry and was happy that he was choosing Natalya.

He believed that Natalya is average-looking as well as an honest caretaker. Once Natalya arrived, Lomov initiated the conversation about the cordial terms of both the families & spoken about his land, he somehow mentioned Oxen Meadows which earlier was a disputed property but was now his.

Natalya was in the perception that Oxen Medows belonged to her family. Both entered into a heated discussion and act childishly and Chubukov’s entry made it more heated. They shouted and screamed while Lomov suffered from extreme palpitation and a numb foot.

They threw Lomov out of the house and continued abusing him. While defaming him, Chubukov accidentally revealed that he had a wedding proposal for Natalya that surprised her, and she suddenly regrets sending him out.

She told her father to brought him back and Chubukov ban himself for being the father of a young daughter. When Lomov returned, Natalya tried to deviate the topic by had a word about shooting. Little later they entered into a debate on their dogs.

Natalya strongly believed that her dog squeezer was better in comparison to Lomov’s Guess. They continued arguing when Chubukov entered the scene only to made things worse again. Everyone got hyper and Lomov finally fell because of palpitations.

The cursing continued when suddenly Natalya noticed that he was unconscious. As they found him unable to drink water, they declared him dead. After a while Lomov moved a bit, they gave him some water to drink, and Chubukov forcefully hands over Natalya’s hands to him, gave his blessings, and asked them to kiss. After regaining his senses, he expressed his excitement and kisses Natalya’s hands.

Natalya again kept convincing him that squeezer is better than Guess but Lomov, being adamant refused to accept this and the quarreling continues. This act-play displays the greed of rich families to marry their children into other wealthy families with the purpose of enhancing their wealth.

Here you can check the word definitions for CBSE Class 10 English First Flight Chapter 11 The Proposal:

We have covered CBSE Class 10 English First Flight Chapter 11 The Proposal – Prose Summary. Feel free to ask us any questions in the comment section below.