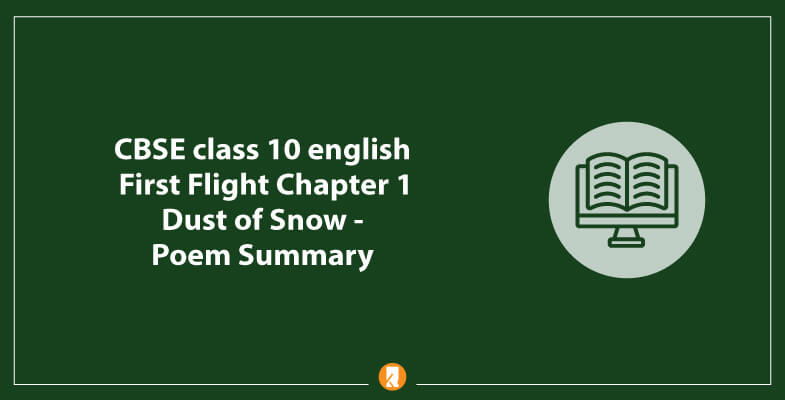 CBSE Class 10 English First Flight Chapter 1 Dust of Snow – Poem Summary: ‘Dust of Snow’ by Robert Frost is one of the more straightforward poems for CBSE class 10. In this poem, Frost explains the significance of experiencing the snow touching your body. The poem tells us how simple things in nature, such as snowfall, can make us happy when we are in a bad mood.

The author in the poem is also experiencing one such awful day until when a crow dusts snow from a hemlock tree, and it falls on him. The poet tries to combine the crow, which is often associated with things like doom and bad omen, with the hemlock tree to incite fear.

By doing so, the poet says that the negative aspects of life, such as the crow in this case, also sometimes bring about positive changes such as happiness. Thus, the poet tries to say that though there are bad things in nature, being amidst it can still be beneficial.

One day, during winter, the poet sits quietly under a hemlock tree. He is in a bad mood. The tree is full of snow. He is just sitting there when a crow perched on one of the branches dusts off snow from the tree, which falls on the author. When the poet feels the cold snow, he becomes refreshed, and all the negative thoughts and feelings disappear.

It is quite ironic to know that a black crow, which we often associate with bad omen, can bring about happiness with the help of a simple act such as dusting the snow off the branch of the tree.

The other aspect of the poem, which is ironic, is the use of the Hemlock tree. The poet preferred not to choose any other tree, such as oak or maple. He chose the Hemlock tree to bring about the irony as this tree is poisonous and signifies toxicity.

Likewise, the poet also uses the ‘dust,’ which is of no value, to evoke the transformation in his mood. Although the hemlock tree is toxic, it is full of pure snow. So, with the help of these contrasting images, the poet shows that a person who is depressed and is about to kill himself can be enlightened. The purity of the snow helps the poet to come out of his disparity and heals his soul.

Thus, the poem teaches us that nothing in this world, no matter how small, is unworthy. Every object is significant. It also shows us that even the smallest things in life that can bring us happiness, just as the snow did for the poet.

If we help other people and be kind to them, that favor will return to us. Kind acts have the power to change our future. So, we must always believe in doing good for others. Only then can we expect something good to happen to us

In this poem, Robert Frost has used significant words to create imagery. He has drawn a contrast between two things that are distinctly apart. For example, the poet tells us how an ominous black crow can bring happiness. Likewise, he has also drawn a comparison between other things in the poem, which are strikingly opposite to each other.

The poet refers to the snowflakes as the ‘Dust of Snow.’ In doing that, he is telling us how something as small and insignificant as snow can help alleviate sadness. At the beginning of the poem, the poet is in an awful mood. But when the snow falls on him, all his sadness disappears. Thus, the poet shows how a simple act of nature, such as snowfall, can make someone happy.

Trees are living beings. As trees are old, they are also a symbol of wisdom. They help absorb carbon dioxide, which means that they absorb all the negative energy in the environment. Trees also give out oxygen, meaning that they fill the environment with positive energy.

However, there are other trees, such as Hemlocks, which are poisonous. Robert Frost, in the poem, ‘Dust of Snow’ prefers to use a Hemlock tree instead of an oak or maple tree as he wants to indicate the gloom that he is feeling. He has lost all interest in life and has thoughts of committing suicide. So, he uses the Hemlock tree as imagery to tell of the sadness that he is feeling.

The crow also stands for grimness, just like the Hemlock tree. Frost says that crow helps the author to bring about the change in him. The author has a suicidal tendency. But when the crow dusts the snow off the branch of the hemlock tree, and when that snow falls on him, it gets his hopes up. Whatever interest he had lost in life suddenly starts to come back to him.

Thus, the author in the poem notices that even the simplest of things in life can make a person happy. He changes his decision to end his life when he sees the snowfall on him. It is also ironic to see how an ominous creature such as a black crow and a symbol of toxicity such as the Hemlock tree acts as catalysts in bringing the poet happiness.

We have covered CBSE Class 10 English First Flight Chapter 1 Dust of Snow – Poem Summary. Feel free to ask us any questions in the comment section below.