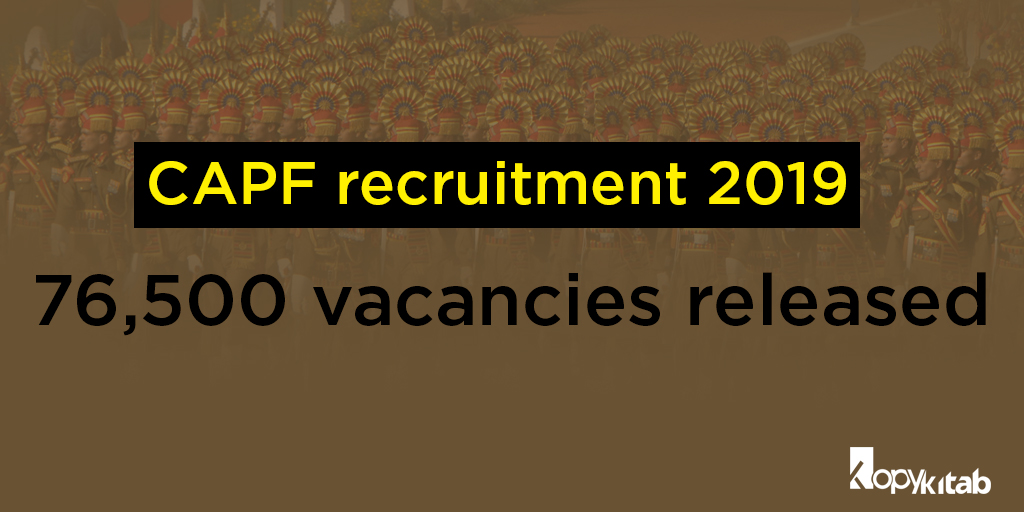 The Union Home Ministry has launched a huge recruitment drive to fill 76,578 vacancies in Central Armed Police Forces (CAPFs) or paramilitary forces. This is a computer-based examination which will begin from February 11, 2019. Candidates who are looking out for central government jobs and interested in this field can go through the blog completely to know about CAPF Recruitment 2019. Of the total vacancies, 54,953 are for the post of Constable (General Duty), 1,073 at the level of Sub-Inspector (General Duty), 466 for Assistant Commandant (General Duty) and 20,086 vacancies pertain to promotional posts and in other cadres such as tradesman, ministerial, medical, paramedical, communication and engineering. We have provided you with complete information regarding the CAPF Recruitment 2019, number of vacancies, and more.

The CAPF include various departments like the Central Reserve Police Force (CRPF), the Border Security Force (BSF), the Indo-Tibetan Border Police (ITBP), the Sashastra Seema Bal (SSB), the Assam Rifles and the Central Industrial Security Force (CISF). According to the reports, Home Minister said that the vacancies in the CAPF will be filled by completing all the necessary groundwork.

The Staff Selection Commission (SSC) will conduct the CAPF Recruitment 2019 for 54,953 vacancies for the post of constable. This will be conducted as a computer-based examination that will begin from February 11 to March 11, 2019.

Regarding the Assistant Commandant level vacancies, Minister said that the direct recruitment was made through the Union Public Service Commission and the results of the written examination to fill these posts were declared on January 10. The shortlisted candidates will appear for a physical and medical examination that will be conducted by the SSB, the nodal force, from February 25 onwards.

CAPF will also fill the remaining 20,086 promotional posts and other cadres like tradesman, ministerial, medical, paramedical, communication and engineering.

Thus, this is all about the vacancies announced according to the reports. Stay tuned for more information. In the meantime, candidates can refer to various CAPF Preparation books available online and start your preparation. We will keep you updated with the latest information.