(a) Develop general heat conduction equation in cartesian coordinates. Deduce the developed equation for the following

(b) Define and discuss thermal diffusivity.

1.(a) (i)  What do you mean by critical thickness of insulation?

(ii) A cylindrical pipe of 20 mm outer diameter is to be insulated so that the heat loss from the pipe is not more than 65 w per m length. The pipe surface temperature is 280°C and it can be assumed that the pipe surface temperature remains the same after application of insulation layer. The surrounding temperature is 30°C. The heat transfer coefficient from the surface is 10 W/m2 °C. Insulation materials available for the service are asbestos (k = 0.14 W/m°C) and slag wool (k = 0.08 W/m °C). Determine thickness of these insulations and comment on the result.

(b) The wall of a furnace is built up of a 250 mm thick layer of fire clay bricks whose thermal conductivity is given by k = 0.83 (1+0.0007 t) W/m °C Calculate the rate of heat loss per m2 of the wall surface if the temperature of the gas in furnace is 1200°C and the ambient temperature is 20°C. The film coefficients of heat transfer from inner and outer wall surface are 30 W/m2 °C and 20 W/m2 °C, respectively.

2 . (a) Define fin efficiency and effectiveness. Discuss effect of different fin parameters on them.

(b) Derive the expression for temperature distribution and heat flow for a very long fin.

(c) Write down nodal equation for point 1 for the case of two- dimensional steady-state conduction for the cases shown in Fig.l. 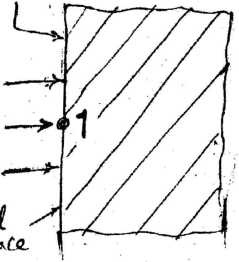 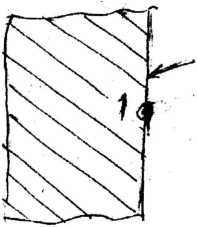 (ii) For laminar flow through a tube

(iii) for turbulent flow through a tube

Discuss variation of heat transfer coefficent for the above cases in the flow direction.

(b) Air at 300 K flows at a velocity of 10 m/s past a flat plate 3m long and lm wide. The plate surface can be assumed at a uniform temperature of 400 K. Determine heat transferred from one side of the plate. The thermo-physical properties of air can be taken from the following table :

3. (i) Discuss nucleate and film boiling, and CHF.

(ii) Discuss process of forced flow boiling in a vertical once through tube subjected to uniform heat flux q.

(ii)  Develop Nusselt’s equation of heat transfer for condensation of vapour over a vertical flat plate.

(b) Develop equation of LMTD for a parallel flow heat exchanger. Clearly state the simplifying assumptions made in the development of above equation and how they affect the estimate of LMTD.

(b) The thermo-physical properties of water can be taken from the following table :

(a) State the Lambert’s law. Prove that for a diffuse black surface, the intensity of normal radiation is the total emissive power of the body.

(b) The surface of the sun has an effective blackbody temperature of 5800 K. What fraction of the radiant energy of the sun lies in the range 0.01 < A <0.4jum, 0.4 </I <0.8/um , and O.S<A<3jum? At what wavelength and frequency is the maximum energy emitted ? Tabulated values of radiation fraction may be used.

5. (a) For the perpendicular plane surfaces (1 and 2) shown in Fig. 2, calculate the heat transfer between the surfaces. Neglect radiation or reflection from the surrounding surfaces. Fig. 3 may be used to calculate the configuration or shape factor. 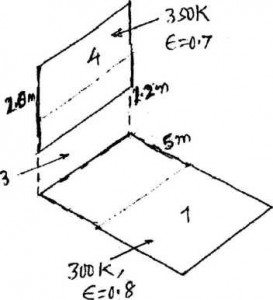 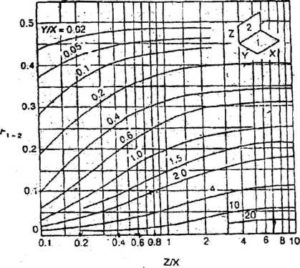 Using the method of electric network for solving radiation problems,write nodal equations for a system consisting of four diffuse gray surfaces which see each other and nothing else.