1  (a) State Varignon’s theorem of moment.

(b) Three forces, P, Q and R act along sides BC, AC and BA of an equilateral triangle ABC. If their resultant force is parallel to BC and passing through centroid of the triangle, prove that

(b) Find the forces in the members EC, DC and DH of the truss

2. (a) Define angle of friction and angle of repose. 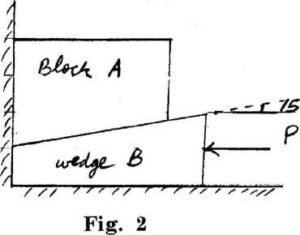 (a)  Explain the principle of virtual work.

(b) Two beams AE and BD are supported by roller B and C as shown in figure 3. Determine the reactions at points B and D using the method of virtual work.

3.  (a) A differential wheel and axle system raised a load of 60 N by an effort of 6N. If the efficiency at this load is 80%, find the velocity ratio of the machine. If the diameter of effort wheel is 300 mm, determine the diameter of each axle. The sum of the diameters of axle is 280 mm.

(b) Two parallel shafts whose centre lines are 4.8 m apart are connected by an open belt drive. The diameter of larger pulley is 1.5 m and that of smaller pulley is 1 m. The initial tension in the belt is 3.0 kN when stationary. The coefficient of friction between the belt and pulley is 0.3. If the smaller pulley rotates at 400 rpm, determine the power transmitted.

(a) A circular hole of diameter 15 cm is cut from a rectangular section of size 20 cm x 30 cm as shown in Fig. 4. Find the moment of inertia of this section about a horizontal x’-x’ axis passing through its centroid. 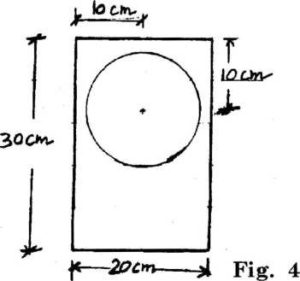 (b) The boundary of an elliptical lamina is represented by

Determine the moment of inertia of this lamina about the minor axis.

4.(a) Explain the difference between rectilinear and plain curvilinear motion.

A particle moves with curvilinear motion has coordinates

(b) Determine the magnitudes of the velocity V and acceleration a at time t = 2 sec.

where g is acceleration due to gravity.

(a)   Define the terms ‘Trajectory’ and ‘Range’ for projectile motion. A particle during its projectile motion reaches height h in time tx. Again it reaches this height V in time t2 measured from start. Show that the height of point

(b)   Two blocks of mass 20 kg and 10 kg are connected by a light string as shown in Fig 5. The coefficient of friction between surface and both block is 0.2. Determine the acceleration of system. 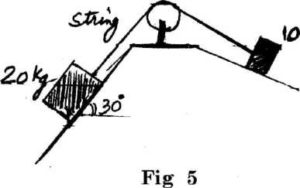 5. (a) Define unstamped free vibration. Determine the natural frequency of simple pendulum shown in Fig 6. Neglect the mass of the rod. The mass of pendulum is m and length of the rod is I.

(b)Three perfectly elastic balls A, B and C of masses 1 kg, 2 kg and 4 kg move in the same direction with velocity 8 m/sec, 2 m/sec and 1.5 m/sec respectively. A impinges on B and B impinges on C. Prove that A and B will come to rest after the impacts. What will be the velocity of C after impact?

(a)  State Work-Energy Theorem. A ball of mass 2 kg, is dropped from a height of 20 cm on a spring of stiffness k = 1225 N/m. Find the maximum deflection of the spring.