As we have learned that if two sides of a triangle are equivalent to the angles opposite to them, they are also similar and vice-versa. In this RD Sharma Chapter 10 Class 9 Maths Exercise 10.6 Solutions, we will learn about the Some Inequality Relations in a Triangle. This topic is mainly concerned with the RHS (Right angle-Hypotenuse-Side) and its concept. According to the Inequality Relations in a Triangle, the total of two sides of a triangle is perpetually greater than the third side of a triangle. Through this exercise, students will get a stepwise explanation of each problem with an example.

Furthermore, the PDF attached below help students to practice more with the varieties of problems available. The questions are prepared by our experts through using RD Sharma, Previous Year’s Question Paper, and Text Book of Class 9.

According to the theorem of Inequality Relations in a Triangle, for any triangle, the sum of two sides of a triangle is perpetually greater than the third side.

Proof of Theorem of Triangle Inequality

The theorem defines the relationship among the three sides of the triangle. According to this theorem, in any triangle, the total lengths of two sides is perpetually greater than the third side of a triangle. In simpler words, it defines that the smallest distance between two different points is always a straight line.

Suppose an ∆ABC as shown below, with a, b, and c as the side lengths. 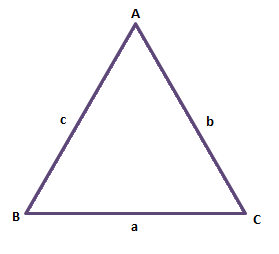 The triangle inequality theorem declares that-

Any triangle that has the least distance from any vertex to the opposite side is Perpendicular. In the figure below, XP is the least line segment from vertex X to side YZ.

Let’s prove the theorem now for a triangle ABC.

Construction: Suppose an ∆ABC. Increase the side AC to a point D so that AD = AB, as shown in the following figure. 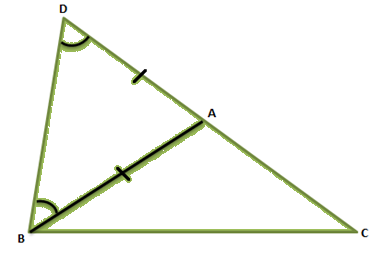 It concludes that the total of two sides of the triangle is greater than the third side.

Solution- If 6cm, 7cm, and 5cm are the sides of a triangle, it satisfies the inequality theorem.

All three conditions are satisfied. Therefore a triangle could have side lengths as- 6cm, 7cm, and 5cm.

A triangle can be drawn only when the total of any two sides is greater than the third side.

So, let’s check the rule.

So, the triangle does not exit.