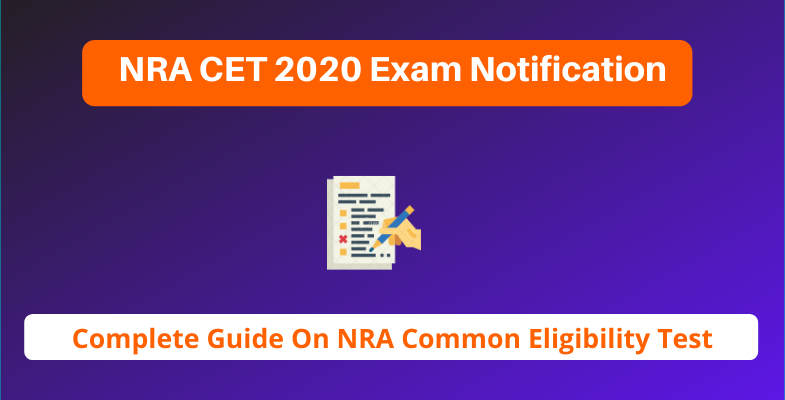 CET stands for Common Eligibility Test. NRA would conduct an online CET which would serve as a screening or a preliminary examination for various non-gazetted government jobs including the RRBs, IBPS (banking jobs) and the SSC jobs (CGL, CHSL, etc.). It would only be the first level of examination which can be taken by the candidates. If qualified, candidates would then have to appear for the Tier 2 and 3 of the examinations, which would consequently be conducted by the NRA.

The Union Cabinet has approved the setting up of the National Recruitment Agency (NRA) that will be responsible for conducting the Common Eligibility Test (CET) for selection to non-gazetted posts in the central government and public sector banks. According to the NRA, there will be a single entrance examination for all non-gazetted posts which are Group B and C posts.

What is the ‘National Recruitment Agency'(NRA)?

National Recruitment Agency will be an autonomous body that will help to ease job recruitment process. It will be responsible for conducting preliminary eligibility’ examination’ (CET) for non-gazetted government posts such as banking, railway (RRB) and Staff Selection Commission (SSC) jobs. The NRA will have representatives from the Ministry of Railways, Ministry of Finance/Department of Financial Services, the SSC, RRB & IBPS.

You should know that the NRA CET 2021 will take place after the recruitment agency is fully set up. However, there is no official notification released by NRA on the CET exam dates. We will keep you posted on all the latest updates regarding NRA CET Exam Dates.

The first round of the selection process which is the screening process (Tier 1 or Prelims) will be taken under CET for the following exams:

The NRA will initially aim at replacing the preliminary exams of 3 agencies namely the following:

It is expected that there will be no or minor changes in the eligibility criteria to apply for the Prelims/ Tier 1 CET test for Bank, SSC & RRB exams. Additionally, the age relaxation to various categories will remain the same, although the final notification is yet to be released on this.

As mentioned earlier, there will be no major changes in the age limit. The NRA CET will be conducted in three levels: 10th pass, 12th pass and graduates. The age limit and eligibility will be based on these three levels. Stay tuned to get the latest updates on CET Age Limit.

The exam pattern will be in accordance with the existing Preliminary Exam Pattern for Bank, SSC & Railways. All the three levels of CET exams (10th pass, 12th pass and graduates) will have separate exam patterns for common exams. Read more about CET Exam Pattern in detail here.

The exam pattern mentioned above is for SSC prelims exams, it is expected that exam pattern will remain around the existing SSC exam pattern for Tier 1 exam, however, we will update the latest CET exam pattern as soon as it is announced in the official site.

The above-mentioned table denotes the Banking Prelims (Tier 1) exam pattern. The CET exam pattern will be designed around the existing exam pattern. You can keep an eye on this space to get the latest information on the CET Exam Pattern 2020.

The CET to be conducted by NRA will take place for Group B & C Railway posts.

The exam pattern for NRA CET 2020 will be developed on the basis of the above-mentioned table for Railway Tier 1 (Prelims) exam. The final CET exam pattern will be released soon on their official website

The exam centre list will be out soon before the exam date of the CET exam. This time, the NRA has made sure that every district will have at least one exam center. Based on your choice of centres and availability you will be allotted the exam centre. We will update the list of the exam centre of NRA CET as soon as it is out.

The CET will conduct a single exam for Bank (Group B & C) Non-Gazetted mainly for IBPS PO, IBPS Clerk, IBPS SO. Now the screening of the first level will be done by NRA CET for three levels of categories; 10th, 12th & Graduates. This is going to be the biggest relief to Bank aspirants, as they can further focus on Tier 2 & Interview process which they mainly failed to earlier.

CET is also going to take over the RRB Group B & C exams. Based on the CET score candidates can appear for a higher level of the selection process; which is Mains or Tier 2 & 3. The exam covered under CET Railway is RRB NTPC, etc.

We have covered a detailed guide on NRA CET 2020 Exam Notification. Feel free to ask us any questions in the comment section below.