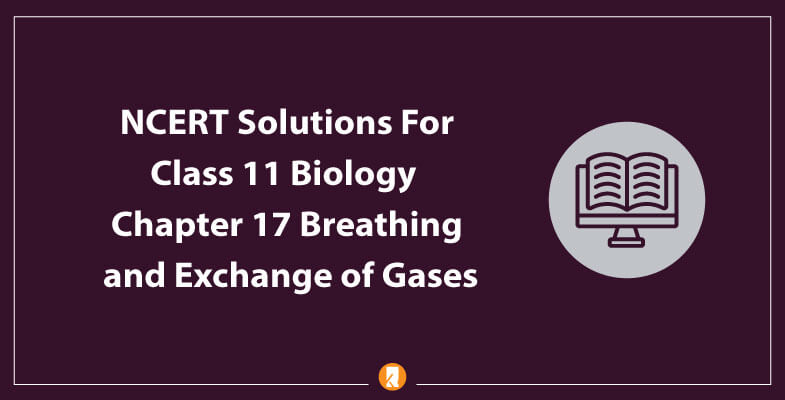 NCERT Solutions for Chapter 16 Biology for CBSE class 11 mostly talk about Respiration. Respiration is an essential life process carried out by all living entities. The process of exchange of oxygen from the atmosphere with carbon dioxide that is produced by the cells is termed as breathing which is commonly known as respiration. The chapter provides students with insights into the mechanism of breathing.

NCERT Grade 11 Biology Chapter 17, Breathing and Exchange of Gases is from Unit 5, Human Physiology. The respiratory organs and the mechanism of breathing are described in the sections of this chapter. A detailed explanation about the definition, difference and importance of breathing and respiration is explained in this chapter.

NCERT Solutions for Class 11 Chapter 17 – Breathing and Exchange of Gases is categorized under Unit 5 – Human Physiology. NCERT solutions incline to the NCERT syllabus prescribed by the CBSE board. Biology is a vast topic. Knowledge of biology is critical especially if one is interested in making a career in the medical field.

The chapter also focuses on the organs that regulate breathing and also on how the mechanism of breathing is exercised in different organisms.Day-to-day life activities, effect of diet, lifestyle and atmosphere on breathing and respiration and the need of clean air are some topics that make the chapter deal with social issues. NCERT Grade 11 Biology, Chapter 17, Breathing and Exchange of Gases is a part of Unit 5, Human Physiology. Unit 5 is a combination of 7 chapters and holds a total weightage of 20% in the NEET examination and 18 marks in the final examination.

We cover all exercises in the chapter given below:-

Important Notes On Breathing And Exchange Of Gases

1. Breathing (External respiration): The process of exchange of O2 from the atmosphere with CO2 produced by the cells.
2. Carbamino haemoglobin: Compound formed in RBCs when CO2 combine with haemoglobin.
3. Inspiration: Oxygen from fresh air taken by lungs and diffuses into the blood.
4. Diaphragm: A muscular, membranous partition separating the thoracic cavity from the abdominal cavity.
5. Expiration: CO2 given up by venous blood in the lungs is sent out to exterior.
6. Respiration: The sum total of physical and chemical processes by which oxygen and carbohydrates (main food nutrient) etc. are assimilated into the system and the oxidation products like carbon dioxide and water are given off.

HYPOXIA-SHORTAGE OF OXYGEN IN TISSUES.

1. Partial Pressure-The pressure contributed by an individual gas in a mixture of gases. It is represented as pO2 for oxygen and pCO2 for carbon dioxide.
2. Pharynx: The tube or cavity which connects the mouth and nasal passages with oesophagus. It has three parts.
i). Nasopharynx (anterior part)
ii). Oropharynx (middle part) and
iii). Laryngopharynx (posterior part which continues to larynx)
3. Adam’s Apple: The projection formed by the thyroid cartilage and surrounds the larynx at the front of the neck.
4. Tidal volume (TV): volume of air during normal respiration (500 mL)
5. Inspiratory Reserve Volume (IRV): Additional volume of air inspired by a forcible inspiration. 2500mL to 3000mL.
6. Expiratory Reserve Volume (ERV): Additional volume of air, a person can expire by a forcible expiration.

We have covered the detailed guide on CBSE NCERT Solutions For Class 11 Biology hapter 17 Breathing and Exchange of Gases. You should have proper CBSE 11th study material to excel at the level of preparation in the correct way. Feel free to ask any questions.