What do ya mean fuzzy

Before illustrating the mechanisms which make fuzzy logic machines work, it is important to realize what fuzzy logic actually is. Fuzzy logic is a superset of conventional(Boolean) logic that has been extended to handle the concept of partial truth- truth values between “completely true” and “completely false”. As its name suggests, it is the logic underlying modes of reasoning which are approximate rather than exact. The importance of fuzzy logic derives from the fact that most modes of human reasoning and especially common sense reasoning are approximate in nature.

The essential characteristics of fuzzy logic as founded by Zader Lotfi are as follows. In fuzzy logic, exact reasoning is viewed as a limiting case of approximate reasoning. In fuzzy logic everything is a matter of degree.

Inference is viewed as a process of propagation of elastic constraints.

The third statement hence, define Boolean logic as a subset of Fuzzy logic.

Fuzzy Sets:- Fuzzy Set Theory was formalised by Professor Lofti Zadeh at the University of California in 1965. What Zadeh proposed is very much a paradigm shift that first gained acceptance in the Far East and its successful application has ensured its adoption around the world.

A paradigm is a set of rules and regulations which defines boundaries and tells us what to do to be successful in solving problems within these boundaries. For example the use of transistors instead of vacuum tubes is a paradigm shift – likewise the development of Fuzzy Set Theory from conventional bivalent set theory is a paradigm shift. Bivalent Set Theory can be somewhat limiting if we wish to describe a ‘humanistic’ problem mathematically. For example, Fig 1 below illustrates bivalent sets to characterise the temperature of a room.

The most obvious limiting feature of bivalent sets that can be seen clearly from the diagram is that they are mutually exclusive – it is not possible to have membership of more than one set ( opinion would widely vary as to whether 50 degrees Fahrenheit is ‘cold’ or ‘cool’ hence the expert knowledge we need to define our system is mathematically at odds with the humanistic world). Clearly, it is not accurate to define a transiton from a quantity such as ‘warm’ to ‘hot’ by the application of one degree Fahrenheit of heat. In the real world a smooth (unnoticeable) drift from warm to hot would occur.

This natural phenomenon can be described more accurately by Fuzzy Set Theory. Fig.2 below shows how fuzzy sets quantifying the same information can describe this natural drift.

The whole concept can be illustrated with this example. Let’s talk about people and “youthness”. In this case the set S (the universe of discourse) is the set of people. A fuzzy subset YOUNG is also defined, which answers the question “to what degree is person x young?” To each person in the universe of discourse, we have to assign a degree of membership in the fuzzy subset YOUNG. The easiest way to do this is with a membership function based on the person’s age. 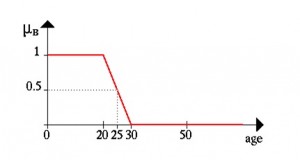 Given this definition, here are some example values:

So given this definition, we’d say that the degree of truth of the statement “Parthiban is YOUNG” is 0.50.