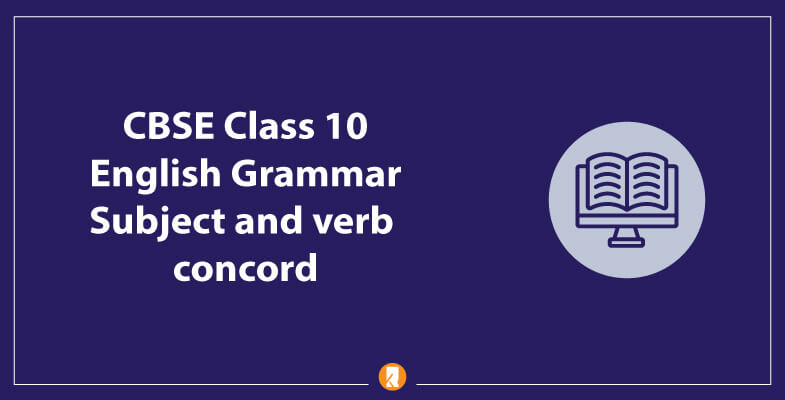 CBSE Class 10 English Grammar Subject and verb concord: Your new academic year must have started and you must be thinking about the ways to channelize your methods of preparation. Class 10 board exam will play an important role in deciding your future and for this reason you need to have a solid base.

When you build a solid structure you will be able to shape your study notes in a better way. There are different kinds of subjects which fall under the CBSE course Class 10 and today we will talk about a topic which has always been ignored by the students.

The topic which we will try to focus on is CBSE Class 10 English Grammar Subject Verb Concord.

It is one of the important topics of the English Grammar syllabus. We have consulted the experts and we have presented their thoughts on this topic. In this blog we have tried to explore the meaning of the definition, the types and we have also presented some explanations in connection with Subject Verb Concord Exercises Class 10. You will also come across some examples which will help you to know Subject Verb Concord Class 10 in a better way and worksheet where you can test your level of understanding. The answers have been mentioned below. Read the blog with an attentive mind.

There are certain rules for this agreement which you need to check to understand the concept. You will find all the rules here and everything in relation to CBSE Class 10 Subject And Verb Concord will become crystal clear when you go through all the rules.

Here are the types

· Singular and Plural Nouns Using “Or” or “Nor”

· Singular Subjects that End in “S”

We will now try to explore all the rules which are important for subjectverb agreement. If you observe the rules you will be able to do your homework with ease or other activities in the classroom. Here some examples have been given to clear all your doubts or queries. Take a look

Basic Rule. A singular subject (she, Bill, car) takes a singular verb (is, goes, shines), whereas a plural subject takes a plural verb.

Example: The list of items is/are on the desk.

A subject will come before a phrase beginning with of. This is a key rule for understanding subjects.

A bouquet of yellow roses lends color and fragrance to the room.

Examples:
My aunt or my uncle is arriving by train today.
Neither Juan nor Carmen is available.
Either Kiana or Casey is helping today with stage decorations.

Rule 3. The verb in an or, either/or, or neither/nor sentence agrees with the noun or pronoun closest to it.

Rule 4. As a general rule, use a plural verb with two or more subjects when they are connected by and.

Example: A car and a bike are my means of transportation.

But note these exceptions:

Exceptions:
Breaking and entering is against the law.
The bed and breakfast was charming.

Rule 5a. Sometimes the subject is separated from the verb by such words as along with, as well as, besides, not, etc. These words and phrases are not part of the subject. Ignore them and use a singular verb when the subject is singular.

Examples:
The politician, along with the newsmen, is expected shortly.
Excitement, as well as nervousness, is the cause of her shaking.

Rule 5b. Parentheses are not part of the subject.

Example: Joe (and his trusty mutt) was always welcome.

Rule 6. In sentences beginning with here or there, the true subject follows the verb.

Examples:
There are four hurdles to jump.
There is a high hurdle to jump.
Here are the keys.

Rule 7. Use a singular verb with distances, periods of time, sums of money, etc., when considered as a unit.

Examples:
Three miles is too far to walk.
Five years is the maximum sentence for that offense.
Ten dollars is a high price to pay.

Rule 8. With words that indicate portions—e.g., a lot, a majority, some, all—Rule 1 given earlier in this section is reversed, and we are guided by the noun after of. If the noun after of is singular, use a singular verb. If it is plural, use a plural verb.

Rule 9. With collective nouns such as group, jury, family, audience, population, the verb might be singular or plural, depending on the writer’s intent.

Examples:
All of my family has arrived OR have arrived.
Most of the jury is here OR are here.
A third of the population was opposed OR were opposed to the bill.

Rule 10. The word were replaces was in sentences that express a wish or are contrary to fact:

Example: If Joe were here, you’d be sorry.

I wish it were Friday.

She requested that he raise his hand.

Now you have gathered a lot of information on subject verb agreement. It’s time to check your progress. Here are some sentences and you need to select the correct form. You can see the right answers after you finish your task. Good luck!

We have covered a detailed guide on CBSE Class 10 English Grammar Subject and verb concord. Feel free to ask any questions in the comment section below.