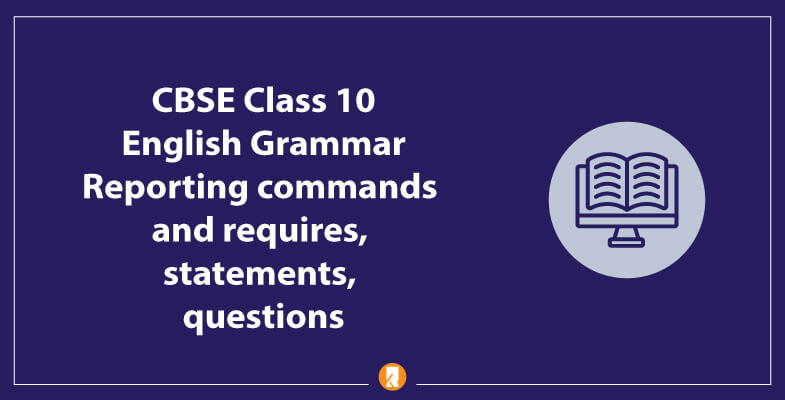 CBSE Class 10 English Grammar Reporting Commands and Requires Statements, Questions: English Grammar is one of those areas which can help a student to score good marks. There are various chapters which fall under it and a student must take care of all the chapters to secure a good position in the Final Class 10 CBSE Board Exam. Equal importance must be given to all the chapters if you are planning to build your career in a particular subject.

Often the students skip some chapters while dealing with various subjects and this must be avoided if you preparing for board exam. A lot depends on your performance in the board exam and hence you need to focus on the important parts. In this blog we will be throwing a light on the essential aspects of
CBSE Class 10 English Grammar Reporting commands and requires, statements, questions.

When you go through all the sections you will get all the useful information in relation to CBSE Class 10 English Grammar Reporting commands or orders, requires or requests, suggestions. You will have enough confidence to practice worksheets after you go through the important parts. Read all the sections with an attentive mind.

Understanding the meaning of the definition

There are various things which fall under Class 10 English Grammar Questions and here reported speeches play an important role. A speech which reports the actions of a person is termed as Reported Speech. There are different things to explore here and for that you need to give attention to all the sections carefully. We have discussed various types of reported speech with examples in this blog. Read it slowly.

There are various types of reported speech and each type is unique in its own way. Understanding each type helps to you to make various comparisons in a better way. The types which we will be discussing here are associated with commands, requests, statements and questions.

There are various kinds of reported speech and a student needs to go through each type to get the complete picture. Checking the explanations is as important as preparing for the final exam. You cannot afford to miss a single point. After you go through the explanations all your queries or confusions related to will be cleared. Here we have tried to explain each type with examples and you must observe the points carefully while checking the examples.

When we want to report an order or request, we can use a verb like ‘tell’ with a toclause: He told me to go away. The pattern is verb + indirect object + toclause. The indirect object is the person spoken to. Other verbs used to report orders and requests in this way are: command, order, warn, ask, advise, invite, beg, teach, & forbid.

Requests for objects are reported using the pattern “asked for” + object.

Suggestions are often placed by using the verbs suggest, insist, recommend, demand, request, and propose followed by a that clause. ‘That’ and ‘should’ are optional in these clauses, as shown in the first two examples below. Note that suggest, recommend, and propose may also be followed by a gerund in order to eliminate the indirect object (the receiver of the suggestion) and thus make the suggestion more polite. This usage of the gerund is illustrated in the fourth and fifth examples below.

You can get a copy of English Sample Paper For Class 10 Grammar from your friends or relatives to solve questions which are based on this topic or other topics.

Your friends can help you with CBSE Class 10 English Grammar Sample Questions.

Here are some questions which you can practice to score good marks in your final exam. After finishing it you need to check the correct answers. The correct answers have been mentioned below

Complete the sentences in reported speech. Note the change of pronouns and tenses.

We have covered a detailed guide on CBSE Class 10 English Grammar Reporting commands and requires, statements, questions. Feel free to ask any questions in the comment section below.