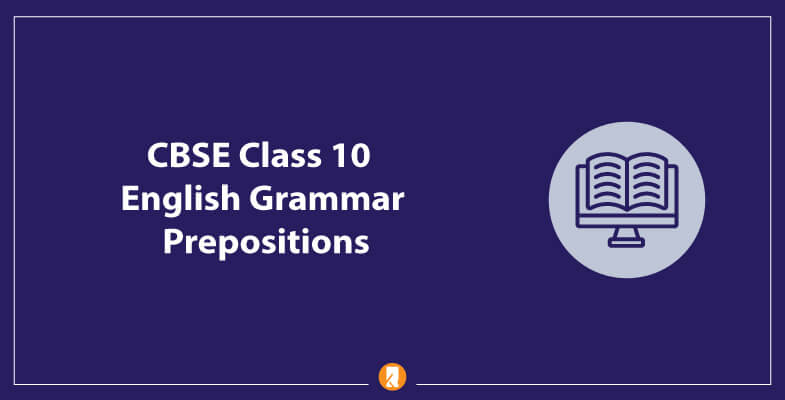 If you want to score very good marks in the English Language and Literature, you must be thorough with your concepts of English grammar. In this article, we shall be discussing about CBSE Class 10 English Grammar Prepositions with examples for a better understanding.

Preposition in English Grammar is defined as a word or group of words placed before a noun or pronoun or gerund, etc. to relate it to another word or words in a complete sentence. Given below are five examples of prepositions as used in a sentence:

She was hiding under the table.

She went out of the room.

The dog jumped off the counter.

She drove over the bridge.

The words in italics are prepositions.

If you are looking for prepositions exercises for class 10 CBSE with answers, you can download them here from the website. You just have to click on the link and save it in PDF format also.

I called on my friend at night.

He came here at the weekend.

She married at the age of twenty.

My friends visited Shimla in summer.

They visited this place in summer.

She called on him in the evening.

The robbery took place in the daytime.

We went to the zoo on Tuesday.

We congratulated him on his birthday.

We gave them a gift on their 25th anniversary.

They reached here on a hot afternoon.

Many people were murdered during the war.

We tried to reach people during October.

During the nineties many taxes were imposed.

He used to ring up many times during the week.

She will finish the shift by 6 o’clock.

By that time, the sun was up.

Applications must be received by the end of the day.

We rested by day and travelled by night.

It rained continuously for ten hours.

She stayed there for twelve days.

They have been working for two hours.

She will not be here for another three hours.

It has not rained since the end of June.

Everything has changed since last summer.

I have been waiting for him since last winter.

He had been writing novels since he was thirty years old.

He has been living with them from the age of twenty.

I get up before six.

She returned before Monday.

They came here after 8 o’clock.

We went to Paris four years after our marriage.

Prepositions for class 10 CBSE exercises are also available on the website in the form of PDF. You can download the files as per your convenience.

They lived at Buck Street by the sea.

He was born at the hospital.

She works at the City Hall.

The plane landed at London airport.

Most of my friends reside in the villages of India.

They used to live in Madras.

The Americans live in the USA.

She stayed in the Fiji Islands for a month or so.

They lived in Europe for ten years.

They spent a few days on an island.

She worked on a farm for a couple of months.

They built their house on an elevated piece of land.

You will find a mall on the outskirts of the city.

The Taj Mahal stands on the banks of river Yamuna.

The train from Calicut has arrived.

They came from Australia for a few days.

She started from Bengaluru for the road trip.

He fell from the fifth floor of the hotel.

She took the book off the table.

The pen rolled off the floor.

Remove this seal off the shelf.

The boy fell off the tree/roof.

Keep off the lawn.

The kid crawled out of the room.

The cuckoo flew out of the cage.

He jumped out of the shelf.

She jumped off the bus.

I saw him coming out of the library.

Prepositions of Direction Towards:

She left for Japan early in the morning.

I went for a haircut on Sunday.

We set off for New Jersey

They left for home late at night.

He went for a stroll in the evening.

The waitress threw the glass against the wall.

He put the ladder against the wall.

He hit his foot against the table.

The mob pressed against the barricade.

He stood with his back against the door.

3.To used to refer to the destination or end point of a place.

She went to China as a tourist.

He went from Mumbai to Delhi.

He was on his way to the airport.

We went from Paris to New York.

The train started from Kolkata and came to Delhi.

I saw a thug hurrying towards me.

He stood with his back towards me.

She went towards the airport.

The bus was coming towards the boy.

He was speeding towards the town.

The cat was under the bed.

She did not look under the table.

She was seen swimming under the small bridge.

I took shelter under the trees.

The river flows under the bridge.

She found a lot of dust underneath the carpet.

He hid the money underneath the bed.

The coin rolled underneath the table.

He left the key underneath the mat.

The gun was found underneath the mattress.

The cuckoo flew over the bird’s nest.

There was dust all over the table.

She hung the wallpaper over the fireplace.

There was a lamp (hanging) over the table.

She held a small umbrella over her kid.

The plane was flying above the clouds.

The sun was right above us.

The birds were flying high above the trees.

The water came above our knees.

We lived in the room above the grocery store.

Now that you have a fair idea about prepositions and its several types, you can go ahead and download prepositions exercises for class 10 CBSE for practicing for the final exams. You can either solve it online or download in the form of PDF and revise it later.

We have covered a detailed guide on CBSE Class 10 English Grammar Prepositions. Feel free to ask any questions in the comment section below.