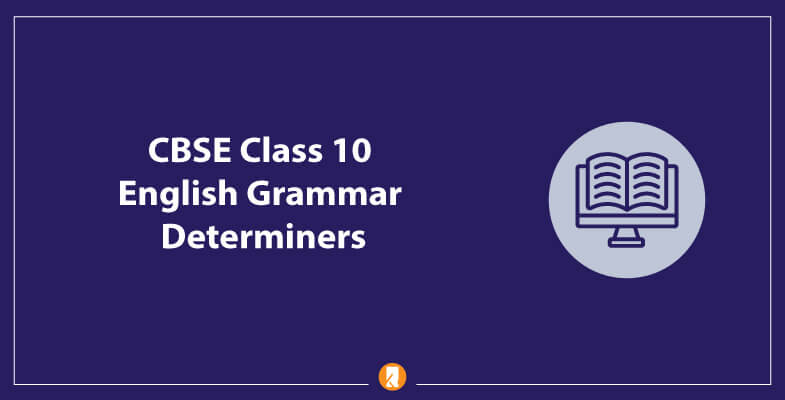 ‘A’ is used in the following conditions:

In sentences where the following words begin with a constant sound.

It is also used where the following word is a singular and countable noun.

‘an’ is used in the following conditions:

Sentences where the word has a vowel sound(a, e, i, o, u) and where there is a singular countable noun.

‘The’ is the indefinite article which can be used with both singular and plural nouns. It is mainly used to refer to a place, person or thing. Some examples are given below:

I have never seen a leopard.

She saw a vintage car at the shop today.

I saw a tall girl yesterday.

A brother deserved to be respected by his sister.

Can you lend me a thousand rupees?

Demonstratives: The second kind of determiners are demonstrative. In English grammar, demonstratives are used as this, that, these, those. ‘That’ (plural form is ‘those’) is used in place of a preceding noun in order to avoid repetition. For examples:

My boots are better than those of my sister.

Our political academies are better than those of Uzbekistan.

My handbag is better than that of my cousin.

Our families are advanced than those of Afghanistan.

Our medical institutions are better than those of Uganda.

In order to refer to a person/persons or thing/things present in the vicinity of the speaker, the English demonstrative ‘This (Plural These)’ is used. This can be explained clearly with the following examples:

This is the tastiest pizza I have had.

These dresses are very attractive.

These books are very interesting.

This is the coolest dog I have ever met.

This is the most interesting newspaper I have read.

In order to refer to a person/persons or thing/things which are away from the speaker, the demonstrative ‘That (Plural Those)’ is used.

Get that cat out of the kitchen.

Throw away those shoes in the trash.

I shall order that pair of jeans from the internet.

He will get that book he saw across the shop.

Get that dog out of the porch.

Possessives: My, your, our, his, her, its, their are some of the possessive determiners in the English language. Possessives are used to refer to the ownership of certain thing/things.

Few examples of Possessive determiners are as follows

This is my bike.

It is their house.

This is her car.

That is our garden.

Here is your book.

Indefinite adjectives in English Grammar are used with some rules and examples as given below:

“Some” ‘Some’ is used as an indefinite adjective in affirmative sentences with uncountable and plural countable nouns.

‘Any’ It is used in questions when you want to ask whether something exists or not. It is also used in negative sentences where we want to say that something does not exist.

More, Less and Fewer are used for comparisons. In order to determine plural and uncountable nouns, ‘more’ is used with ‘than’ to emphasize on quantity or amount which is greater than the other quantity. ‘Less’ is used where the amount denoted is less than another amount. ‘Fewer’ is used to emphasize on a group of things that are smaller than another group.

Apart from these determiners, some of the other which are also used in the English language are:

All it is used mostly with a plural verb accompanied by a countable plural noun.

Both it is used as a determiner for two things of the same kind.

Either and Neither these are used to emphasize two persons or things where one out of the two may or may not be involved in a situation.

Each and Every these determiners are used to refer to all the members of a group or persons or things.

One it is used to refer when someone is talking or writing about a group and something in particular is to be said about a single member of the group.

Another it could be used with singular and countable nouns. It is used to refer to an additional person or thing of the same kind.

Other this is used in addition with plural nouns or with uncountable nouns.

Enough this is used as a prefix for uncountable or plural nouns. ‘Enough’ implies that there is something which is just sufficient for the need.

Most this determiner is used to hint all the amount or belonging to a group.

Several it is used to refer to a number which is not precise or large but certainly more than two.

Alternatively, students can also download Determiners exercises for class 10 CBSE pdf from our website and save it for future use. For other subjects, you can go through our entire website in detail.

We have covered a detailed guide on CBSE Class 10 English Grammar Determiners. Feel free to ask any questions in the comment section below.