1 a. State and explain Coulomb’s law. Clearly indicate the unit of quantities used in the force equation.

b.   State and prove the Gauss theorem.

2 a. Obtain an equation for the electric scalar potential.

c.  Check whether the following potential equations are satisfying Laplace’s equation or not

3 a.  Derive Poisson’s and Laplace’s equations.

b.  Derive equations of energy stored and energy density in an electrostatic field.

4 a. Obtain the differential form of Ampere’s work law, in a steady magnetic field.

b.  By using Biot-Savart’s law, obtain the equations of magnetic field intensity and magnetic flux density at any point on the axis of a coil. 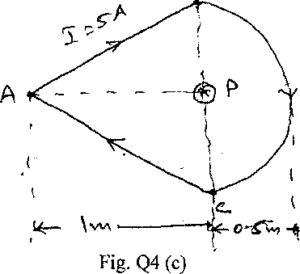 b.  For a time varying field, having a capacitor, show that, the conduction current is equal to the displacement current.

c.   Find the depth of penetration, when a 20 MHz signal is propagating the free space and penetrating into a conductor of conductivity cr = 5 x 107 O/m.

6 a. State and prove the pointing vector theorem.

c.   The electric field intensity at 10 km in free space from a radio station was found to be 2.2 mv/m. Calculate : i) The power density ii) The total power radiated from the station. Assume the radiation to be spherically symmetric.

7 a.  Show that the uniform plane wave is transverse in nature.

b.  Discuss the wave propagation in a good dielectric (absorption medium).

8 a. Derive an equation for the force acting as a current element.

b.  Derive an equation for the torque as a closed circuit.

d.  Derive an equation for the inductance of a solenoid.