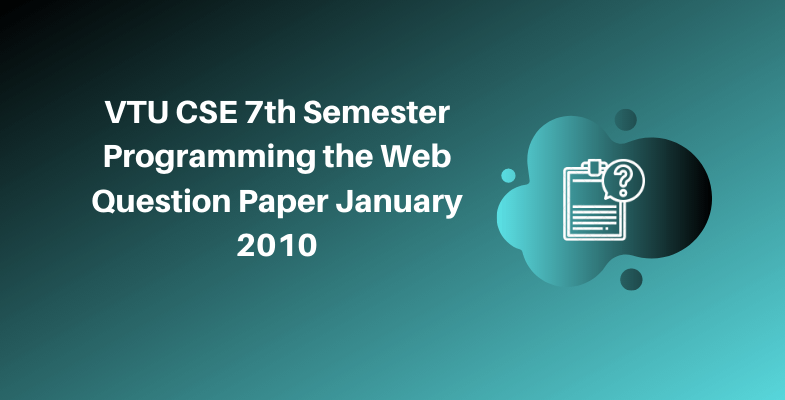 VTU CSE 7th Semester Programming the Web Question Paper January 2010: VTU CSE 7th Semester Programming the Web Previous year Papers are considered as the best study materials to score good marks in the semester exam. Practicing these previous year question papers assist the students to get a clear idea about the question paper pattern and types of questions that will be asked in the exam.

You must have Programming the Web Question Paper along with the latest Computer Science 7th sem Syllabus to enhance your semester exam preparation.

Here we are providing you the complete guide on Programming the Web Question Paper January 2010.

To score better marks in the 7th semester, you should also have depth knowledge in the entire subject. You can boost your preparation by solving previous year question papers. It will give you information about the important chapters and concepts to be covered in all chapters.

1 a. Explain the task of a DNS name server.

b.   Explain the response phase of HTTP.

c.    Give syntax and an example to each of the following tags:

b.   With examples, explain a style class selector.

3 a. With examples, describe all input and output operations in java script.

b. Give examples for the different ways an array object can be created in java script, and also write XHTML document and java script code to sort ‘N’ given values using a sorting technique.

4 a. Describe functions in java script. Write an XHTML document and java script function to

compute and print factorial of a number.

b. Write XHTML document and java script code to implement the following :

i) To count the number of names in the given array that end in either “ie” or “y”.

ii) To print the position in the string of the leftmost vowel.)

5 a. With an example, explain on focus event in java script.

b. Describe the approach to addressing XHTML elements using forms and elements.

6 a. With examples, explain absolute and relative positioning of elements injava script.

b. Write an XHTML document that contains three short paragraphs of text, stacked on top of each other, with only enough of each showing, so that mouse cursor can always be placed over some part of them. Write java script code so that when cursor is placed over the exposed part of any paragraph, it should rise to the top to become completely visible.

7 a. What are the two primary tasks of a validating XML parser?

b. How does an XSLT processor use an XSLT style sheet with an XML document?

8 a. Write a Perl program which creates a hash table containing country names keys and their capitals as values and perform the following :

i) Print all pair of values (country name and capital)

ii)     Accept country name and print the capital of it.

b.     With an example, explain how files are handled in PERL.

We have covered VTU CSE 7th Semester Programming the Web Question Paper January 2010. Feel free to ask us any questions in the comment section below.