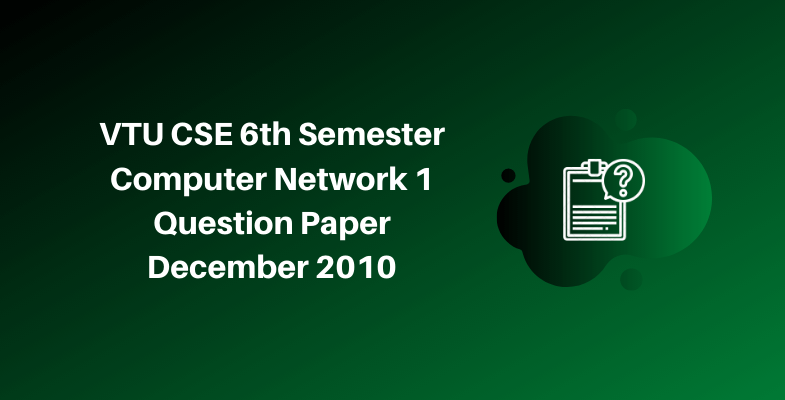 VTU CSE 6th Semester Computer Networks -1 Question Paper December 2010: To secure better marks in the exam, you should practice as many question papers as possible. It will give you information about the important chapters and concepts to be covered in all chapters.

You must have Computer Networks -1 Question Paper along with the latest Computer Science 6th sem Syllabus to enhance your semester exam preparation.

Here you can check the Question Paper December 2010

1. a. An alternative to LAN is simply a big time sharing system with terminals for all users. Give two advantages of a client server system using LAN. Draw a block diagram of client – server model.

b. Imagine that you have trained a dog to carry a box of three 8 mm tapes, each containing 7 gigabytes. The dog can travel to your side, wherever you may be, at 18 km/hour. For what range of distances does the dog has a higher clock rate than transmission line whose data rate is 150 Mbps?

c. How is the internet useful for home users?

b. Convert the IP address whose hexadecimal representation is C22F1582 to doted decimal notation.

c. For a hierarchical routing with 4800 routers, what region and cluster size should be chosen to minimize the routing table for a 3 tier hierarchy? How many entries would be required for normal case?

4. a. Explain count to infinity problem in case of distance vector routing.

c. How do computer networks differ?

d. A large number of consecutive IP addresses are available starting at 198.16.0.0. Suppose that four organizations A, B, C and D request 4000, 2000, 4000 and 8000 addresses respectively in that order. For each of these, give the first IP address assigned and mask in the w.x.y.z/s notation.

b. Give two examples of computer applications each for connection oriented and connectionless service.

d. Identify the components that contribute to the end – to – end delay experienced in setting up an ATM connection using PNNI.

6. a. What is the bandwidth – delay product for a 50 Mbps channel on a geostationary satellite? If the packets are 1500 byes (including overhead), how big should the window be in packets?

b. R.T.P. is used to transmit CD quality audio, which makes a pair of 16 bit samples 44100 times/sec, one sample for each of the stereo channels. How many packets per second RTP must transmit?

b. List out some of the potential pitfalls while measuring network performance and parameters.

C. List out Berkley Socket primitives. Which primitives are used only by server? Why?

d. A client sends a 128 byte request to a server located 100 km away, over a one gigabit network. What is the efficiency of the line during the remote procedure call?

We have covered VTU CSE 6th Semester Computer Networks -1 Question Paper December 2010. Feel free to ask us any questions in the comment section below.