3. Missing data, if any, may be suitably assumed.

b. For the mechanical system shown in Fig.Ql(b), write the differential equation relating to the position y(t) and the force f(t).

3 a. Define the following for an underdamped second order system :

5 a.  Define and oKglain the significance of angle and magnitude condition, as applied to the root locus method^ stability analysis of linear system.

b.  Define brafe away / in point on a root locus. Explain any one method of determining the same.

b.  The open loop transfer function of a unity negative feedback system is given by:b K(s + 3) G(s) = s(s -f- 2s + 2) Using the Nycpist criteria, find the value of K for which the closed loop system is just stable.

b. For the Bade pfet shown, evaluate the transfer function. Refer Fig.Q7(b). 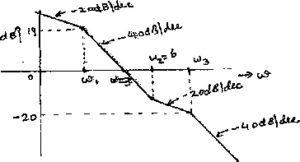 8 a. Obtain the state and output equation for the electrical network shown in Fig.Q8(a):

b. The state model of the system is given by :