1. Answer any FIVE full questions, choosing at least two questions from each.

2.   Missing data may be suitably assumed

1    a. Mention the merits and demerits of open loop and closed loop control systems and give an example for each.

b.   For the mechanical system shown in figure Q1 (b), obtain the force-voltage analogous network. 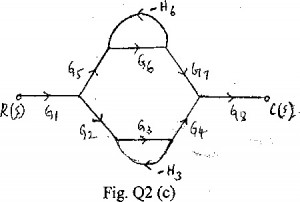 3 (a)Derive an expression for the under damped response of a second order feed back control system for step input.

(b)Obtain expressions for rise-time and peak-time for a second-order feed back system response for a step input (under-damped case).

(C) A positional servomechanism is characterized by an open loop transfer functionG(s)=, where k and a are positive constants, for a unity feedback. Find the valuess(s+a) of k and a for a damping coefficient value of 0.6 and damped frequency of 8 rad/sec. Also find the peak value of the response when the system is excited by a step of 2 volts.

(b)Explain Routh-Hurwitz ‘s’ criterion for determining the stability of a system and mention by limitations. A unity feedback control system has: k(s+13) G(s)=s(s+3)(s+7) Using the Routh’s criterion, calculate the range of £k’ for which the system is

ii)   Has its closed loop poles more negative than – 1.

5 (a)Explain briefly the following terms with respect to root-locus technique:

(b) Explain in detail the procedural steps of Nyquist stability criterion.

(c) A feed back control system has loop transfer function: GH(s)=s(s+l) Sketch the SyQuest plot and comment on the stability of a system.

7 a. Derive expressions for resonant peak and resonant frequency for a second order system.

b.  Find the open-loop transfer function for a unity feed back second order control system for which resonant peak is 1.1 units and resonant frequency is 11.2 radians/sec. (06 Marks)

b. A feed back system is characterized by the closed loop transfer function: