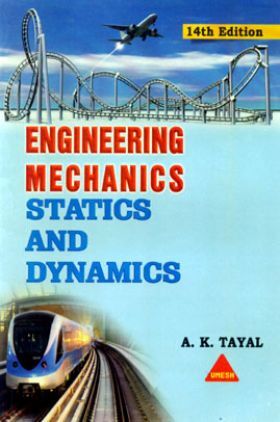 Engineering Mechanics Statics and Dynamics By A K Tayal

Mechanics is essentially a deductive science based on a few fundamental principles and has vectorial character. This book has been written with a view to emphasize the vectorial character of mechanics in such a manner so that the material presented may not require any previous knowledge of mathematics beyond elementary calculus. For this reason, products and derivatives of vectors are not used. A chapter on the ‘Review of Vectors and Forces in Space’, however, has been included as an appendix to introduce the vector approach of the subject. This chapter can be covered before going on the mechanics of coplanar system of forces. It is a well recognised fact that the teaching of the first course in a subject should be based on a text book. A systematic, consistent and clear presentation of concepts through explanatory notes and figures and worked out problems are the main requirements of a text book. This book has been written to meet such requirements. Merely stating the principles and explaining the concepts is not enough; these are to be identified as applicable to the various problems which may appear to be strangely different. With this objective, a large number of worked-out problems have been included in this book.

In the most worked-out problems, free-body diagrams have been separately drawn with the coordinate axes shown. The equations of equilibrium or of motion, as applicable, have been indicated. Inertia forces have also been clearly identified in a problem. Alternative methods of solution to a number of problems have given or indicated to explain the comparative merits of the concepts and solution procedures involved. In fact, skill through repetition may be as much true here as in occult sciences.