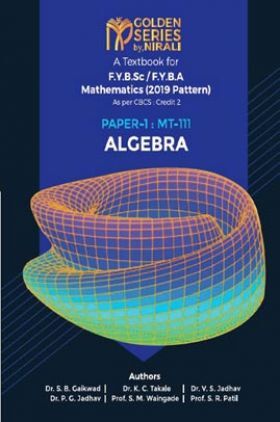 This book is based on a course Algebra. We write this book as per the revised syllabus of F.Y. B.Sc. Mathematics, revised by Savitribai Phule Pune University, Pune, implemented from June 2019. Algebra lies at the very foundation of diverse areas like coding theory, cryptography and many branches of theoretical computer science.

In the second chapter, we discuss induction principle and well ordering principle on which many proofs in mathematics depend upon. We then study: integers and divisibility properties of integers, division algorithm and its applications, greatest common divisor and least common multiple and their properties, Euclidean algorithm and its applications.

In the fourth chapter, we study the properties of complex numbers. Complex number are useful in electronics, uid dynamics and many other disciplines.

Audience of the Book :
This book Useful for B.Sc & BA Students.
Table of Content:

2. Divisibility Theory in the Integers

3. Primes and the theory of Congruence