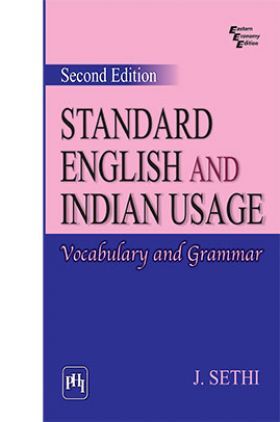 About The Book Standard English And Indian Usage
Book Summary:

The Second Edition of this text continues to build on the three aspects of the language discussed in the previous editionvocabulary, grammar and idioms.

Divided into two partsPart One: Vocabulary and Part Two: Grammar the book in Part One deals with Words Often Confused, Indianisms, Indian Coinages, Idioms, and Archaisms. Part Two takes up those areas of grammar in which divergences from Standard English are very commonarticles, prepositions, tenses, verb patterns, and so on.

The emphasis in the Grammar section is not so much on form as on usage. The comments on each divergent item include its Standard English equivalent (and sometimes its origin as well), together with the authors opinion on whether the item should be retained at least within the country.

With such contents and features, the book should prove very valuable to a large cross-section of the educated populationstudents, English teachers, professionals and businessmen.

WHATS NEW TO THE EDITION :

In Chapter 3, new items on balance/change and marketing/shopping are added.

Additional examples have been provided for dependent questions in Chapter 11.

Explanations and comments have been made clear at many places and a few items transferred to places where they seemed to fit in better.

"Good Morning friends, I have been using Kopykitab since 2018 and it is very usefull or good. All competitive exams books are available like Reasoning, Maths, History and also Science. The book which you get t Rs.500 from the market, you will get is in Rs.300 here and doen't need to go to any shop. If you have any book and want to highlight, can do it in this app also. And it is not necessary that scrapbook will be only in PC, you can use it in mobile also. You can operate it in both PC and Mobile through the same id.After your purchase you also get cashback and can use this cashback in next book. It is very useful for students, it helps very well, it is time saver app. Use this app it is very beneficial. Thank you."

"Hi Kopykitab My self Deepak Ghogare. I am teaching B Pharma 1st year students and the subject is analogy and physiology so as a teacher in the previous lockdown I started using kopykitab content in that basically the book related with the subjects we know all the colleges are close and we are not able to attend offline classes, kopykitab give access of the different books as per my requirment books are available outside in a costly amount on the other hand Kopykitab is not taking too much I am happy to give you the number five star thank you."