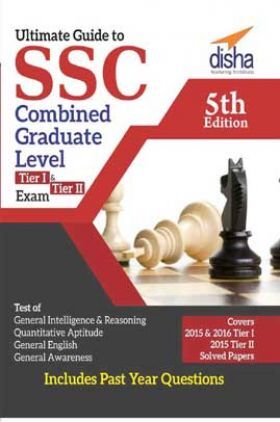 Ultimate Guide to SSC Combined Graduate Level - CGL (Tier I & Tier II) Exam 5th Edition has been written exclusively for the CGL Tier I & Tier II Exams strictly according to the revised exam pattern. The book includes the past papers of 2012 - 2016 of Tier I. The book also includes the 2015 Tier II Solved paper.

Audience of the Book :
This book is useful for SSC exams-CGL (Tier I & TierII).
Key Features:

2. Detailed theory along with solved examples and short-cuts to solve problems.

4. Another unique feature of the book is the division of its General Awareness section into separate chapters on History, Geography, Polity, General Science, Miscellaneous topics and Current Affairs;

5. The book also provides a separate chapter on Data Interpretation and Graphs; New Chapters on Indian Economy, Computer Fundamentals and Comprehension have been added in the book.

6. The book has a comprehensive coverage of Arithmetic, Algebra, Geometry, Co-ordinate Geometry and Trigonometry;