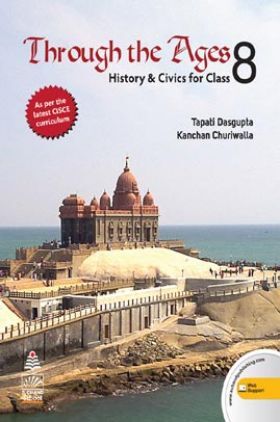 Through The Ages History & Civics For Class - VIII

Through the Ages, History and Civics for classes 6 to 8 follows the latest syllabus guidelines of the Council for the Indian School Certificate Examinations. Presented in a systematic manner, the books narrate mankind’s wonderful journey through the ages starting from pre-historic ages to the modern times.

The series presents history in a manner that triggers the inquisitiveness of the child. It is not just about kings and queens, but a documentation of the events of the past, the rise and fall of civilizations, and the lives and achievements of the common as well as illustrious people. The civics section has been dealt in a manner in which the student can easily relate to in the context of everyday situations. It aims to help them become responsible members of the society.

Audience of the Book :
This book Useful for Class VIII Students.
Sailent Feature:

1. Key Concepts defined at the beginning of each chapter

4. Timelines for better understanding of chronology.

5. An attractive doublespread that displays pictorial snippets with additional and interesting information on a topic discussed in the book

6. Interesting stories about personalities and rulers discussed in the chapters

7. Variety of exercises to test the level of understanding

9. Picture study allows to gauge the observational skill of the students and also their interpretation of the topic discussed

1. Beginning of the Modern World

5. The Unification of Europe under Napoleon and His Defeat

6. The American War of Independence

8. The Decline of the Mughal Empire

9. Foundation of the British Rule in India

10. The Growth of British Power in India

11. Social and Economic Impact of British Rule in India

20. Agencies of the United Nations

Books similar to Through The Ages History & Civics For Class - VIII