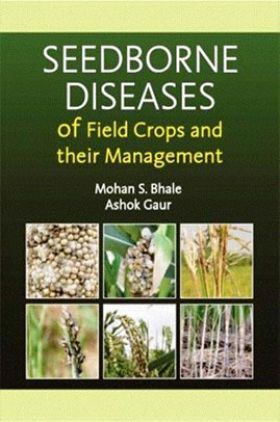 The awareness for seed health has increased many folds among planners, researchers, growers, traders, and consumers, in the trade-era of WTO and subsequent post GATT- implications of various treaties. With the implementation of Seed Bill (amendment in Seed Act 1966), the seed health testing shall be an obligatory issue beside the consideration of seed germination and purity tests for certification. However, in Indian Seed Certification System several diseases associated with seeds have been designated as objectionable in seed production programme of Foundation and Certified seeds. The tolerance limits for Seed Crop and Seed Lot have been formulated with Indian Minimum Seed Certification Standards.

Audience of the Book :
This book Useful for Plant Pathology.
Table of Contents:

3. Detection of Seaborne Fungal Pathogens and Salvaging of Infected

6. Detection of Nematodes through Molecular Techniques

26. Potential Threats of Seed Associated Pathogens in Major Oilseed Crops and their Management

30. Genetic and Breeding of Nematode Resistance

"Good Morning friends, I have been using Kopykitab since 2018 and it is very usefull or good. All competitive exams books are available like Reasoning, Maths, History and also Science. The book which you get t Rs.500 from the market, you will get is in Rs.300 here and doen't need to go to any shop. If you have any book and want to highlight, can do it in this app also. And it is not necessary that scrapbook will be only in PC, you can use it in mobile also. You can operate it in both PC and Mobile through the same id.After your purchase you also get cashback and can use this cashback in next book. It is very useful for students, it helps very well, it is time saver app. Use this app it is very beneficial. Thank you."

"Hi, Am here to share my views on the brand new library i.e digital library which i found while surving over the internet for finding my curriculam & notes and it is kopykitab.com. My views are i would like to share certain things, they provide book in a very affordable range, they provide good discounts and it is a integrated system like you can communicate with them as well it is a time saving thing, we need not to go to many other book stores or to the libraries for getting notes or something. So yes it is an amazing platform with all kind of books even for competitives & everything. Thankyou!!!!"