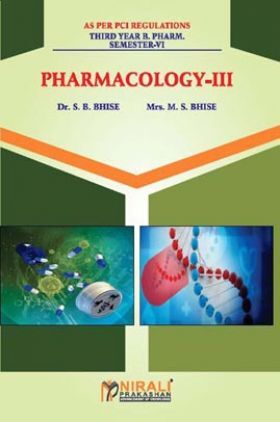 This is the third book in the series of books related to Pharmacology. The book has been written as per the syllabus prescribed by PCI. Earlier two titles viz Pharmacology I and Pharmacology II have been published by Nirali Prakashan.

The topics like monoclonal antibodies, biosimilars have never appeared in the earlier text books. Relevant preparations of these new types of drugs have been updated in the book. In the coming years, these new drugs are going to occupy higher market share. Hence, the students should be aware about their details. Efforts have been made to include strength and trade names of most of the drugs, as available in Indian market. Still, newer trade names will be updated as and when they appear in Indian market.

Mechanisms of actions, therapeutic uses, adverse reactions, drug interactions and pharmacokinetic details of most of the drugs have been included. This information is likely to be updated from time to time.

Audience of the Book :
This book Useful for Pharmacy Student.
Table of Content:

1. Pharmacology of Drugs Acting on Respiratory and Gastrointestinal System

5. Principles of Toxicology and Chronopharmacology