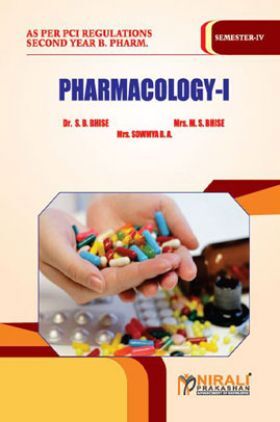 Clinical role of pharmacists have been identified during last 9 years after establishment of regulations for Pharm. D in 2008 followed by establishment of Pharmacy practice regulations in 2015 by Pharmacy Council of India. The practice of Pharmacy needs some time to get strong footing in our country. During such time, subject like Pharmacology-I need strong base by budding pharmacists.

The subject of Pharmacology has a different context for pharmacists in comparison to doctors. While doctors give more importance to clinical effects, pharmacists are more concerned with mechanism of action, and effects of drugs on animals can have equal relevance in case of pharmacists. Trade names have equal relevance to both doctors and pharmacists. This approach has been reflected in the content. Strong background of physiology is needed for understanding of Pharmacology-I. Trade names of drugs have been included in the appendix. The list is not exhaustive but includes common tradenames.

Audience of the Book :
This book Useful for B. Pharma student.
Table of Contents:

4. Pharmacology of Central Nervous System - I

Download Sample PDF
Tags: Pharmacology - I by Dr. S. B. Bhise Mrs. M. S. Bhise Sowmya B. A. B. Pharmacy B. Pharmacy English B. Pharmacy Textbook