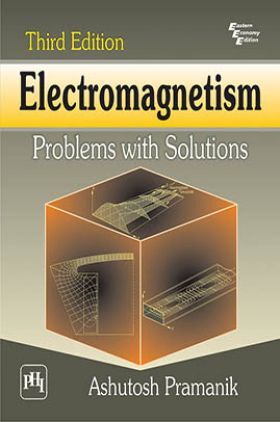 About The Book Electromagnetism
Book Summary:

This Third Edition of the book contains more than 60 new problems over and above the original 480 problems of the Second Edition. The additional problems cover the whole range of new topics which will also be introduced in the third edition of the authors main textbook titled Electromagnetism: Theory and Applications. There are some other new problems necessary to further enhance the understanding of the topics of importance already existing in the book. There has been no change in the philosophy of this book. It has been designed to serve as a companion volume to the main text to help students gain a thorough quantitative understanding of EM concepts that are somewhat difficult to learn. The problems included, as a result of the authors long industrial and academic experience, illuminate the concepts developed in the main text.

This book is recommended in Guwahati University, Assam, National Institute of Technology, Patna.

Besides meeting the needs of undergraduate students of electrical engineering and postgraduate students and researchers in physics, the book will also be immensely useful to engineers and applied physicists in industry.

WHAT IS NEW TO THIS EDITION?

1. A number of new problems on evaluation of a.c. resistance and reactance due to skin effect in cylindrical transmission line configurations, for which the cylindrical polar coordinate system cannot be used.

2. New problems on design and optimization of permanent magnets (now being used in the development of new permanent magnet machines) by using FrhlichKennelly equation for representing the demagnetizing curve and Evershed criterion for optimizing the magnet dimensions and its material volume.

3. Some problems on applications of vector analysis to different geometrical configurations.

4. Some problems on Electrostatics and Magnetostatics in which the method of images has been used as auxiliary support.

5. Nearly 1820 new problems in the chapter on Electromagnetic Induction making it fully comprehensive and covering all facets of electromagnetic induction. This chapter now contains more than 60 solved problems, none of which are of the formula substitution type, and include problems ranging from annular homopolar machines to phenomenon of pinch effect, identification and separation of flux-linkage as well as flux cutting effects, etc.

6. Some problem on Electromagnetic Waves dealing with surface current speed.

7. Problems on Lorentz transformation in the chapter titled Electromagnetism and Special Relativity.