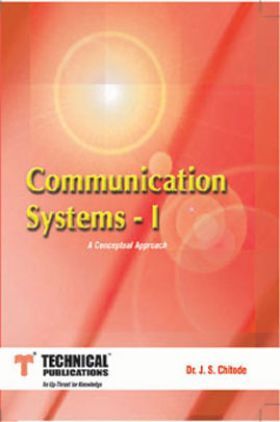 Communication Systems - I (A Conceptual Approach)

Earlier editions of this book are highly appreciated by readers. Suggestions from many readers encouraged me to bring out third edition of this book. Large number of examples from university question papers are included in this edition. At the end of every section, university questions are given for practice. Hints about answers are also given. This will save the time for preparation of the subject.

The probability theory and random variables are largely used in communication theory. Over the communication channel the transmitted signal is affected due to environmental parameters. Noise mainly interferes the transmitted signal over the channel. The signal is also attenuated because of the environmental effects. Therefore the signal received by the receiver is noisy. The detection of the signal at the receiver is affected and errors are created. Probability theory is applied to the model of the channel and probability of error is estimated. The fourier transform is used as a powerful mathematical tool for the analysis of signals and systems in time and frequency domains. Although the baseband signal cannot be characterised as the standard test signal, other signals can be used. Sine, square or sinc pulses are used as test signal inputs to systems. The majority of digital and analog communication systems are characterised as linear time invariant systems.

Audience of the Book :
This book Useful for Electronics Engineering student.
Table of Contents:

9. Detection of Binary Signals in Presence of Noise