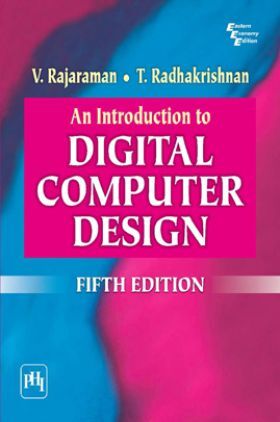 An Introduction To Digital Computer Design

The first part of the book presents the basic tools and developes procedures suitable for the design of digital circuits and small digital systems. It equips students with a firm understanding of logic principles before they study the intricacies of logic organization and architecture of computers in the second part.

Besides discussing data representation, arithmetic operations, Boolean algebra and its application in designing combinatorial and sequential switching circuits, the book introduces the Algorithmic State Machines which are used to develop a hardware description language for the design of digital systems.

The organization of a small hypothetical computer is described to illustrate how instruction sets are evolved. Real computers (namely, Pentium and MIPs machines) are described and compared with the hypothetical computer. After discussing the features of a CPU, I/O devices and I/O organization, cache and virtual memory, the book concludes with a new chapter on the use of parallelism to enhance the speed of computers. Besides, the fifth edition has new material in CMOS gates, MSI/ALU and Pentium5 architecture. The chapter on Cache and Virtual Memory has been rewritten.

Audience of the Book :
This book Useful for Computer Science, IT And MCA Student Table of Contents:

Part I: DIGITAL TECHNIQUES AND DESIGN

3. An Algebra for Digital Systems

8. Software Layers in a Computer System